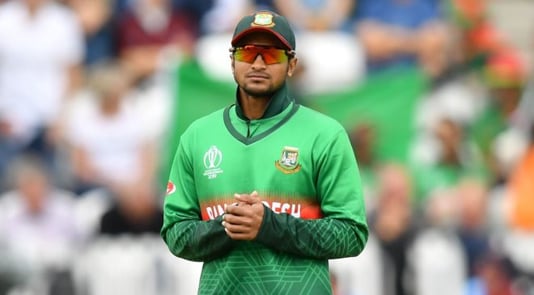 DHAKA, Aug 14, 2022 (BSS)-After a controversial week that saw him experience huge criticism from all quarters, Shakib Al Hasan is finally back in the place where he should be. The ace all-rounder who was just appointed as the captain of T20 format got back to the cricket ground today after one month.

He did some running and spent some time in gym in a bid to remove the rustiness as he is eyeing to return to International cricket with the upcoming Asia Cup, which will be held in T20 format.

The format of the regional tournament changed to give the participating teams an opportunity to have a best preparation for the ensuing T20 World Cup in Australia in October-November.

Once Nurul Hasan Sohan was appointed captain for the Zimbabwe T20 series, which Shakib skipped to have some rest, it was clear that the ace all-rounder is the favourite to replace Mahmudullah Riyad as the long term captain in this format.

But as has been the case, Shakib again produced drama and controversy that kept him in the headline for all wrong reasons. His contract with the Betwinner News, a sister concern of betting house Betwinner sparked a controversy this time.

While involvement with betting company is completely banned as per the law of Bangladesh and the Bangladesh Cricket Board (BCB), Shakib also inked the deal without any permission of the board.

He rather announced his attachment with the Betwinner through a post in his social media, that eventually created a huge uproar and made BCB president Nazmul Hassan Papon annoyed to such extent that he threatened to impose lifetime ban on Shakib unless he cancels the deal.

Shakib however cancelled the deal and BCB duly appointed him captain for T20 format after Test cricket without resolving the problem that Shakib didn't take any permission before striking a deal.

However Shakib as usually seemed to have unfazed of what happened in those days. The star all-rounder who was on holiday after the T20 series against West Indies in July, looked tired as he was running from one side to the other side of Mirpur Sher-e-Bangla National Cricket Stadium.

The rust is understandable but he needs to overcome this as quickly as possible as the board gave him the onus to make the T20 team a force to reckon with.

The Asia Cup starts on August 27 at the United Arab Emirates and Bangladesh will play their first match on August 30 against Afghanistan.