Profile of the State Minister 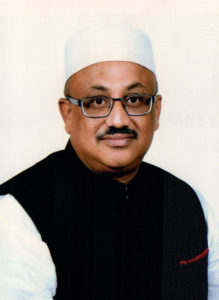 Dr. Md. Murad Hassan MP, Honorable State Minister for Information and Broadcasting, Govt of the People’s Republic of Bangladesh born in a respectable muslim family at Daulatpur village of Sarishabari Upazila under Jamalpur District on 10th October in 1974. His father’s name is Advocate Motior Rahman Talukder and  mother’s name  is Monowara Begum. His father was a famous politician and learned advocate. He was a freedom fighter, organizer of freedom fighting and took part frontly  in the field of the liberation war of Bangladesh. Mr. Motior Rahman  was a judge appointed by the government of Mujibnagar and was the convener of Sarbodalio Sangram Parishad (Jamalpur-Sherpur) in the period of liberation war. Mr. Motior Rahman was  the founder president of Jamalpur  District Awami League from 1977 to 1996. He was an active member of  the central working  committee of Bangladesh Awami League from 1986 to 2003. He was also the founder principal of Jamalpur Law College and was six times elected president of District Bar Council of Jamalpur. Mr. Hassan’s generous mother was a devoted companion of his father’s glorious political journey.

In his boyhood Dr. Md. Murad Hassan started his primary education in kishowloy Adarsha Biddya Niketon located in Jamalpur town. He passed SSC (science) examination in first divsion with star marks in 1990 from Jamalpur Zilla School. After then he passed HSC (science) examination in first division with star marks in 1992 from the reputed Notre Dame College, Dhaka. In 2001 he received MBBS degree with glorious result form the renowned Mymensingh Medical College. In 2004-2005 he obtained  his Post Graduation Training (PGT) on Plastic and Reconstructive Surgery from Dhaka Medical College and Hospital(DMCH). He completed his Post Graduation, MPhil on Radiation Oncology in 2011 from Bangabandhu Sheikh Mujib Medical University (BSMMU).

Mr. Murad Hassan  is deeply involved in politics and has been working to fulfill the dream of the father of the  nation Bangabandhu Sheikh Mujibur Rahman under the  proper leadership of Honorable Prime Minister Sheikh Hasina. He has been enthusiastic to ensure  effective representation of the new generation in politics and in the parliament. Mr. Murad Hassan  was elected as a working member in 1994, Organizing Secretary in 1997, President in 2000 of Bangladesh Chatra League of Mymensingh Medical College unit. In 2003 he was elected as a working member of the Central Committee of Bangladesh Awami Jubo League and in the same year he became the member of the Bangladesh Awami League, Jamalpur district. In 2014 he was elected as a working member of Sarishabari Upazila Awami League. In 2015 he became the Health and Population Affairs Secretary of Bangladesh Awami League, Jamalpur district. He became a working member of Central Ghatok Dalal Nirmul Committee in 2016 and contributed against anti-movement liberation alliance.

Mr. Murad Hassan  was elected as a member of the  National Parlament for the first time with the highest margin of votes from 141 Jamalpur-4 (Sarishabari, Mesta and Titpolla)  held on 29th December 2008 in the 9th parliamentary election. He has travelled several countries with the Parliamentary Standing Committee related to the Ministry of Health and Family Welfare as a representative. He was elected as a Member of Parlament for the second time with significant victory on 30th December 2018 in eleventh parliament election 141, Jamalpur-4 constituency. He took his oath on 7th January 2019 as a State Minister of Bangladesh, Ministry of Health and Family welfare. He has been serving successfully as a State Minister from 20th May 2019 in the Ministry of Inforamtion.

Besides politics, Mr. Murad Hassan is actively involved in various social welfare activities. He played a pioneer role in establishing different educational, cultural, religious and social development institutions in Sharishabari and also in  Jamalpur District. He is a life member of Shadhinota Chikitshok Parishad(SWACHIP) and Bangladesh Medical Association (BMA). Mr. Murad Hassan is an excellent orator and a much familiar face in mass media and social media. He is quite passionate about  reading, sports  and especially to  listening as well as playing music.  As a doctor, he has been serving the poor and rootless people of his constituency by giving medical facilities with lavish hand from 2001.

Mr. Murad Hassan is married and  blessed with  a daughter and a son. His betterhalf is also a doctor.