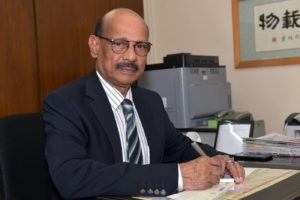 Abul Kalam Azad, an eminent journalist, has been serving as the Managing Director and Chief Editor of Bangladesh Sangbad Sangstha (BSS) with the rank and status of a secretary to the government.

Prior to his appointment as the head of the state-run national news agency, Azad worked as the Press Secretary to Honourable Prime Minister Sheikh Hasina from 2009 to 2014.

Earlier, he served as the Press Minister at the Bangladesh Embassy in Washington D.C. Upon return from the United States, the then Leader of Opposition in Parliament and Awami League President Sheikh Hasina appointed him as her Press Secretary, a position `where he served from 2002 to 2009.

A former student of premier Dhaka University, he also obtained a diploma degree on “Advanced Journalism” from Moscow.

Azad made his debut as a journalist in esteemed Bangla newspaper, the Daily Ittefaq, in 1973 and worked there for decades keeping marks of his professional excellence and dignity.

During his long professional career, he gradually emerged as an active trade unionist. He was the president, secretary general and treasurer of Bangladesh Federal Union of Journalists (BFUJ), the apex body of journalist trade unions across the country.

Before his election to the two top positions of BFUJ, Azad served as the president and general secretary of Dhaka Union of Journalists (DUJ). He was a member of the 5th Wage Board for journalists, employees and workers of the country’s newspaper industry.

He is currently a member of the Editors Guild, Bangladesh, Management Committee of Kurmitola General Hospital and Bangladesh Standards and Testing Institute (BSTI) Council.

Azad is a member of the National Committee of Bangabandhu Parishad and the President of its Munshiganj district unit. He is associated with many other social and cultural organisations as well.

He earned the repute of being a student activist during his studies in Dhaka University, a quality that earned him the membership of the Central Executive Committee of the then Chhatra League, the student wing of Awami League. He was also the Greater Dhaka District Treasurer of the then All-Party Chhatra Sangram Parishad during the 1969 mass upsurge.