Had I watched game in morning session I would’ve had heart attack: Papon 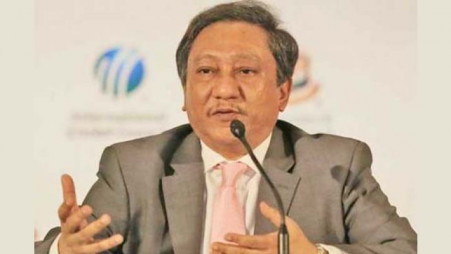 DHAKA, May 23, 2022 (BSS) - Bangladesh Cricket Board (BCB) president Nazmul Hassan Papon was happy to not to see the Tigers sensational collapse in the first 30 minutes of the day when they were slumped to 24-5 and were in danger of being all out in just one session.

Liton Das and Mushfiqur Rahim helped the side recover from the shaky start, sharing a record 253-run in an unbroken sixth wicket partnership as Bangladesh ended the day on 277-5.

Papon said he would have had heart attack if he had been there during Bangladesh's collapse.

"I was not there when we were reduced to 24 for five. If I had, I would have had a heart attack," Papon said here today.

"I was with the Prime Minister then. She asked me about the situation of them match but I avoided her, saying that 'Apa (sister) I have not seen yet. I will now go to the ground and will inform you later."

Papon was there with ICC Chairman Greg Barclay who had paid courtesy call on the Prime Minister Sheikh Hasina.

"When I came to the ground and saw the condition of the match, I was severely shocked. But luckily Liton and Mushfiqur Rahim saved us the day. They batted beautifully to keep us in good stead."