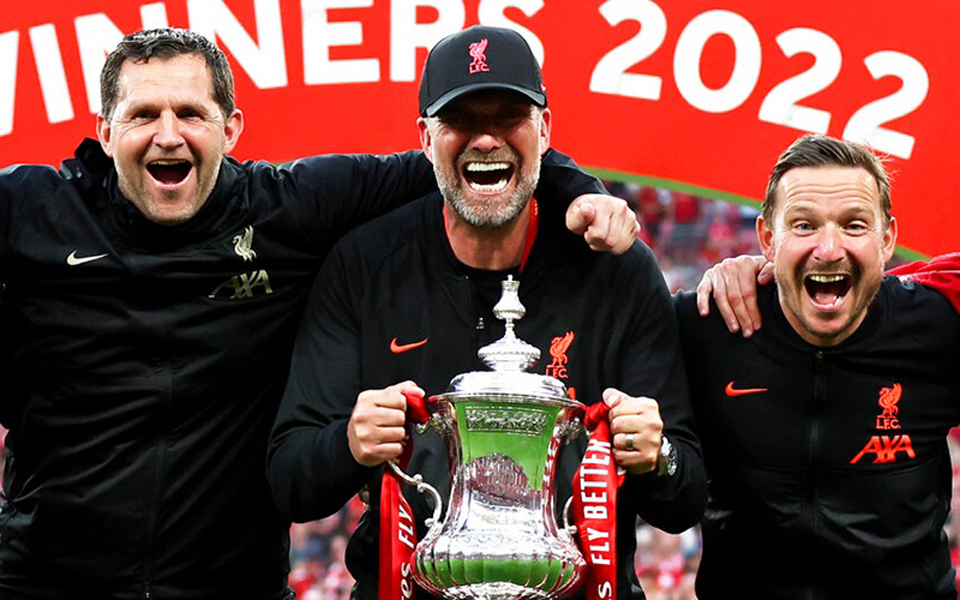 LONDON, May 15, 2022 (BSS/AFP) - Jurgen Klopp urged Liverpool to give one last push for the quadruple after they beat Chelsea on penalties in the FA Cup final to keep their history bid alive.

Klopp's side won 6-5 in the shoot-out following an enthralling 0-0 draw after extra-time at Wembley on Saturday.

Having already beaten Chelsea on penalties in the League Cup final in February, Liverpool remain in contention to become the first English team to win all four major trophies in a single season.

The Reds face Real Madrid in the Champions League final in Paris on May 28 and still have an outside chance of catching Premier League leaders Manchester City.

Liverpool are three points behind City with two games left for both teams.

City travel to West Ham on Sunday before Liverpool return to action at Southampton on Tuesday and Klopp wants his squad to drag a final effort from their weary limbs in what will be their 61st game of a marathon season.

"The quadruple, it's outstanding that we can talk about it, it's crazy," Klopp said.

"But we play Tuesday against Southampton and we have no clue who can play. I think we will have to make a few changes.

"It will be incredibly tough. The quadruple is on if you like, but also off as well. City are three points ahead and have a better goal difference. If they win at West Ham it's hard."

The quadruple chase might have been dented after Mohamed Salah and Virgil van Dijk were unable to finish the final due to injuries.

Klopp doesn't expect them to be long-term absentees, but is unsure if they will face Southampton.

"I think they will both be fine, for Tuesday we will see. We will train on Sunday and if they are available I will take it," he said.

Liverpool's first FA Cup triumph since 2006 was especially meaningful for Klopp, who saluted his players for matching Chelsea blow for blow after such a gruelling campaign.

"My team knows exactly what I think of them. This is a trophy for the whole club. It's massive, it means the world," Klopp said.

"You saw with the performance what it means to the players. It's massive. It's game number 60 in a very intense season and pulling out a performance like this is absolutely incredible."

Klopp also revealed that Liverpool's penalty success was in part due to their work with a company who specialise in neuro science.

"The penalties are a lottery but we did it again. We work with a neuro company, they got in contact a few years ago," Klopp said.

"They said we can train penalty shooting. I said that sounds interesting, come over. We met, we worked together. This trophy is for them, like the League Cup."

It was another harsh Wembley defeat for Chelsea, who, just as they did in the League Cup final, pushed Liverpool to the brink without delivering the knockout blow.

Blues boss Thomas Tuchel admitted it will be hard to lift his players in time for their final two games against Leicester and Watford next week as they try to clinch third place in the Premier League.

"The season is not finished. We have goals to reach in the Premier League.It will be harder now but not impossible," he said.
Tuchel took heart from drawing four times with a team of Liverpool's quality.

But he knows closing the gap will be tough given the uncertainty caused by Chelsea's change of ownership after Roman Abramovich sold up to Todd Boehly's consortium.

"We showed we can compete with them, but the difference is Liverpool they can produce these kind of performances more often and we struggle to do that," he said.

"This is where the gap is. The sanctions didn't make it easier to close it, players are leaving."