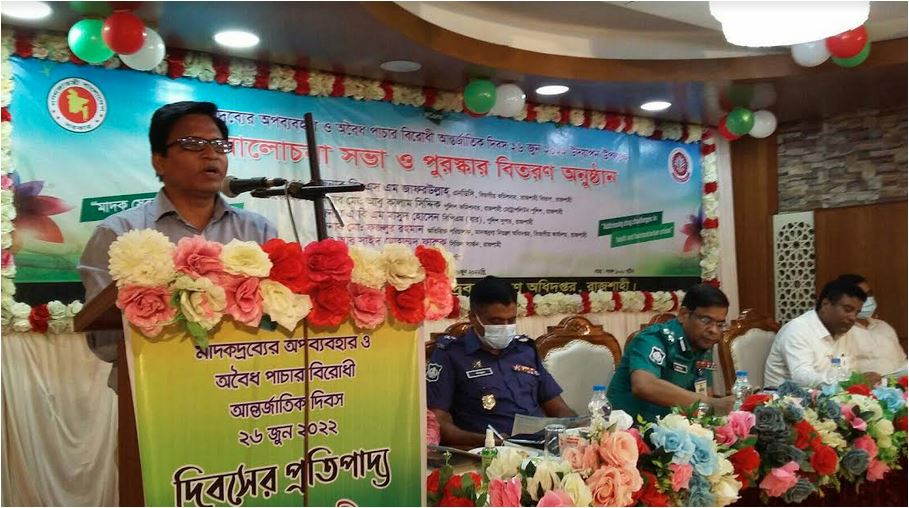 RAJSHAHI, June 26, 2022 (BSS) - United efforts of all the government, non-government and volunteer organizations concerned has become an urgent need for mitigating the abuse of drugs along with its illicit trafficking and trading.

Around 80 percent of the drug addicts are of the age group of 15 to 30 in the region. So, there is no alternative to concerted efforts against drug abuse to protect the young generation from degradation.

The observation came at a post-rally discussion held at Nanking Darbar hall in observance of the International Day Against Drug Abuse and Illicit Trafficking-2022 today.

The District Administration and Department of Narcotics Control (DNC) jointly organised the programme discussing ways and means on how to free the city from the curse of abusing drugs.

Commissioner Zafarullah said the law enforcing agencies alone are not capable of combating the social disease, but community participation coupled with family and social contribution is very important to this end.

Forging social resistance has become indispensable to uproot the crime as it's being judged as a grave concern in the society.

He added that all the local government institutions side by side with the public and private bodies should come forward and work together to attain the cherished result in this regard as the drug-abusing situation is gradually aggravating.

He said the present government has a declaration of zero tolerance against drug-addiction and urged all quarters to come forward to protect the young generation from the grip of social crime.

"We have to build a healthy society to achieve sustainable development goals," he said, adding the movement against drug abuse should be turned into a social movement.

RMP Commissioner Kalam Siddique said full-length support of the community in general and leaders of influences in particular can be the effective means of freeing the society from abuse of drugs along with its illicit trade and trafficking.

Creation of mass-awareness about the curse of drug-abuse coupled with its fatal consequences has become crucial to mitigate the social disease.

He added that a drug-abuse-free society must be built at any cost to protect people, particularly the young generation from deadly aggression of the drugs.

Kalam Siddique urged the community people to extend their wholehearted cooperation towards law enforcing agencies with authentic information about the drugs traders and traffickers so that they could be brought to book.

He said drug trafficking is a social and criminal problem that has transformed in recent years into a major threat to the health and security of people and regions. Drug dependence is a disease, not a crime. The real criminals are the drug traffickers.