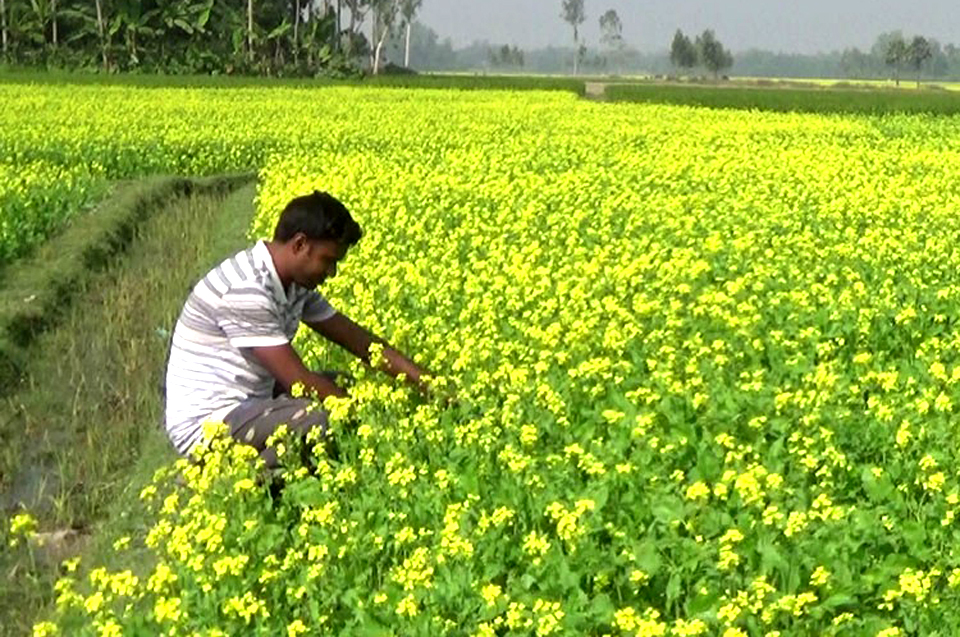 RAJSHAHI, Nov 24, 2022 (BSS) - Record 3.71 lakh tonnes of mustard yield are expected to be harvested from around 2.48 lakh hectares of lands in all eight districts under Rajshahi division during the current Rabi season.

Department of Agriculture Extension (DAE)'s different initiatives and favorable climate conditions in the region during this Rabi season becomes a boon for mustard plants to grow well, predicting bumper productions.

Shamsul Wadud, Additional Director of DAE, said 2.07 lakh farmers were given seeds and fertilizers worth over Taka 5.58 crore free of cost for cultivating mustard in the division under the government's agriculture incentive programme.

In addition to the DAE, various other research and development organizations like Bangladesh Agriculture Research Institute (BARI) and many NGOs have taken adequate steps in collaboration with other departments this season to achieve the fixed production targets.

The agri-departments and NGOs have already provided quality seeds, necessary inputs and training on the latest technologies to the farmers.

The landless and marginal farmers have also brought vast tracts of the sandy char lands under mustard cultivation this time in the Ganges basins and the crops are growing excellent everywhere in the region.

Abdul Mazid, 35, of Nandigram village under Durgapur Upazila, said he had cultivated mustard seed on two bigha of land last year and got yield of six mounds per bigha.

He has brought three bighas of land under the cash crop farming this season and is expecting good yield.

Rashidul Hassan, 45, another farmer of Kakonhat village, has become successful through cultivating the cash crop for the last couple of years. This year, he cultivated the crop on four bighas of land.

The IWRM project is being implemented at around 1,280 drought-prone villages in 39 Union Parishads and three municipalities of eight upazilas in Rajshahi, Naogaon and Chapainawabganj districts since 2015, said Jahangir Alam Khan, Coordinator of the project.

The On Farm Research Division (OFRD) of BARI has been working to make crop farming profitable through extension of its improved variety and improved management in the Barind area.

BARI has released 16 high yielding mustard seed varieties and two of those- BARI Sharisha-15, 18 and Tari-7 have become popular in the growers' level of the region.

Dr Jagadish Chandra Barman, Principal Scientific Officer of OFRD (Barind Centre), said more than 100 farmers were given improved varieties of mustard seeds and fertilizer for farming on around 120 bighas of land in Rajshahi, Chapainawabganj and Naogaon districts during the current season.

He said mustard seed is a water-saving crop and its expansion in the Barind area is very important towards lessening the gradually mounting pressure on its underground water.