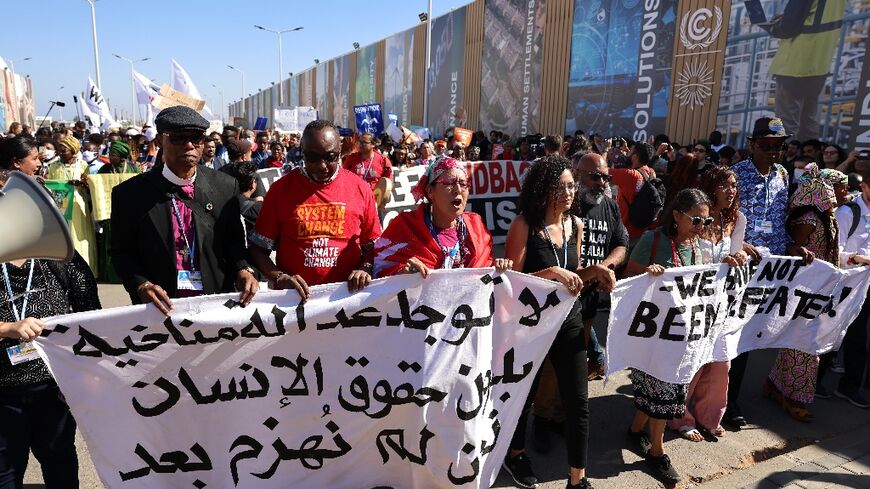 SHARM EL SHEIKH, Egypt, Nov 13, 2022 (BSS/AFP) - Chants of "free them all" and "no climate justice without human rights" rang out between the halls of COP27 Saturday, in the largest protest since the UN climate summit began.

Jailed Egyptian dissident Alaa Abdel Fattah's sister, Sanaa Seif, who is at the summit campaigning for her brother's release, marched in the front line with hundreds behind her.

With them came Seif, who at two press conferences this week was heckled by apparently pro-government attendees, who called her brother a "criminal", not a "political prisoner".

Behind her on Saturday -- winding between halls inside which world leaders negotiated over the climate crisis -- hundreds of protesters demanded urgent action towards climate justice and human rights, an AFP correspondent reported.

Although demonstrations at COP27 must be approved by organising authorities and should take place only in a special zone, activists behind Saturday's rally said they got UN permission for their action outside the designated area.

They marched behind a banner reading: "You have not yet been defeated" -- the title of Abdel Fattah's book, which has become a rallying cry for summit activists.

The demonstrators incorporated the words into their demands for indigenous, women's, labour and disability rights. Multiple speakers have ended their speeches in the conference's formal proceedings with the same sentence.

"I came here thinking I would be alone. I am sure that those in power thought that my voice would be drowned out and ignored. Instead, I found that my family was already here waiting for me," protest organiser Asad Rehman read from a statement from Seif.

She stood silently next to him.

Abdel Fattah was a key figure in Egypt's Arab Spring uprising more than a decade ago. He began consuming "only 100 calories a day" in April, his family said, to protest the conditions he and about 60,000 other political prisoners face in the country.

His family say they fear for his life, and have made months-long appeals to the international community, particularly Britain, where Abdel Fattah gained citizenship this year from behind bars through his British-born mother.

Some world leaders have raised his case with Egyptian President Abdel Fattah al-Sisi in bilateral meetings during the climate talks.

His lawyer, former presidential candidate Khaled Ali, on Saturday submitted another request for a permit to visit Abdel Fattah in the prison in northern Egypt where he is being held.

Ali had said on Thursday that he was denied entry to the Wadi al-Natroun prison despite having a permit from the prosecution.

The plea has been picked up by one of Egypt's most watched talk show hosts, the ardently pro-Sisi Amr Adib. On prime time television Friday, Adib said the pardon would be in "the interest of Egypt first and foremost".