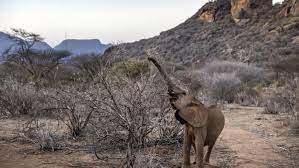 NAIROBI, Nov 4, 2022 (BSS/AFP) - More than 200 elephants and hundreds of zebras and gnus have died in Kenya's worst drought in four decades, the country's tourism minister said on Friday.

The crisis has affected nearly half of Kenya's regions and at least four million out of its 50 million people.

"The drought has caused mortality of wildlife, mostly herbivore species," Tourism Minister Peninah Malonza told a press conference in Nairobi on Friday, adding that 14 species had been identified as badly hit.

"The mortalities have arisen because of depletion of food resources as well as water shortages."

Between February and October, officials recorded the death of 205 elephants, 512 gnus, 381 zebras, 12 giraffes and 51 buffalo, she said.

"Elephants in (the) Amboseli and Laikipia-Samburu regions are worst affected by the drought, as the ecosystems (there) have recorded more than 70 elephant deaths," Malonza said.

The authorities are dropping off hay for the animals, she said.

Last year the country had 36,000 elephants, according to tourism ministry estimates.

Four consecutive rainy seasons have failed in Kenya, Somalia and Ethiopia and millions across the Horn of Africa have been driven into extreme hunger. More than 1.5 million cattle have died in Kenya alone.