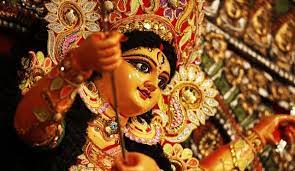 The five-day annual celebration started with unveiling of the face of the deity and Kalparambho on Maha Shasthi and it will end on October 5 with the immersion of the idols on the day of Bijaya Dashami.

The incarnation (Bodhon) of the Goddess Durga happened yesterday evening ahead of the puja on the day of Maha Panchami.

Swami Premananda Maharaj of Ramkrishna Mission and Ramkrishna Math, Dhaka told BSS that Goddess Durga will come to earth (martyalok) from heaven (Kailash) riding on elephant which signifies, as per mythology, that the earth will witness natural disasters like storms but production of grains and crops will increase.

Goddess Durga will return to heaven (Kailash) riding on boat which signifies the world will get blessings.

According to the schedule of Durga Puja of Ramkrishna Mission, Maha Shasthi puja was  held at 7.30am today with holding of different rituals including Kalparambho and Bodhon, Amantron (invitation) and Adhibas.

Recitation of verses from the Holy Sri Sri Chandi, blowing of conch shells and beating of traditional dhak-dhols (traditional drums), kashor at temples and pandals began this morning and it will continue for next five days until immersion of idols.

Maha Nabami Puja will be held on the fourth day on October 4 at 6.30am and offering of pushpanjali or anjali at 10.30am.

On the final day of Bijaya Dashami, puja will begin at 6.30am, pushpanjali at 8am and puja completion and Darpan Bisharjan will be held by 8.50am.

The five-day festival will end with immersion of idols of goddess Durga and her offspring - Ganesha, Karitik, Laxmi and Saraswati - and devotees will receive Shantijol (sacred water from where deities are immersed).

The Mahalaya, the auspicious occasion heralding the advent of goddess Durga, was celebrated on September 25.

Generally, the idols are made diligently and methodically by the artisans to create exquisite pieces of artistry.

Durga Puja will be celebrated at 32,168 mandaps across the country this year including 241 in the capital, according to Bangladesh Puja Udjapan Parishad.

Earlier, the parishad in a press briefing informed that the number of puja mandaps was 32,118 across the country in the previous year.

Parishad's President JL Bhowmik said volunteers will work at every puja mandaps round the clock during the five-day Durga Puja to help the law enforcement agencies to avert any untoward situation.

In the wake of the coronavirus pandemic, the number of puja mandaps decreased slightly in the previous year but this year the number increased.

Puja shopping also got momentum in the last week ahead of Puja as major markets and malls were crowded with customers. Many people are still busy in puja shopping on the last day before Puja.

Durga Puja signifies the birth of Durga with the blessings of gods, as a collective energy, to fight the demon king Mahishasura.

Exquisitely crafted and decorated life-size clay idols of the Goddess Durga depicting her slaying the demon Mahishasura have been set up in temples and Durga Puja mandaps ahead of the celebration.

These idols will be worshiped for five days and immersed in the river on the fifth day. The puja is performed in temples, homes and temporary mandaps.

The celebrations also include other major deities of Hinduism such as goddess Lakshmi (goddess of wealth, prosperity), Saraswati (goddess of knowledge and music), Ganesha (god of good beginnings) and Kartikeya (god of war).

Stringent security measures have been taken across the country during the celebration of Durga Puja to avert any untoward situation.

"We have already taken three tiers of security measures at mandaps ahead of Durga Puja and it will continue till the end of the puja," he said.

He said necessary CCTV cameras will be installed at puja pandals while handheld metal detectors and archway gates will also be set up.

He said necessary volunteers will be engaged round the clock at puja mandaps while separate entry and exit routes for men and women, adequate lights at puja mandaps and pandals and the places of immersion, standby generator or charger lights will have to be arranged.

The police chief urged all to call the National Emergency Service-999 in case of emergency.