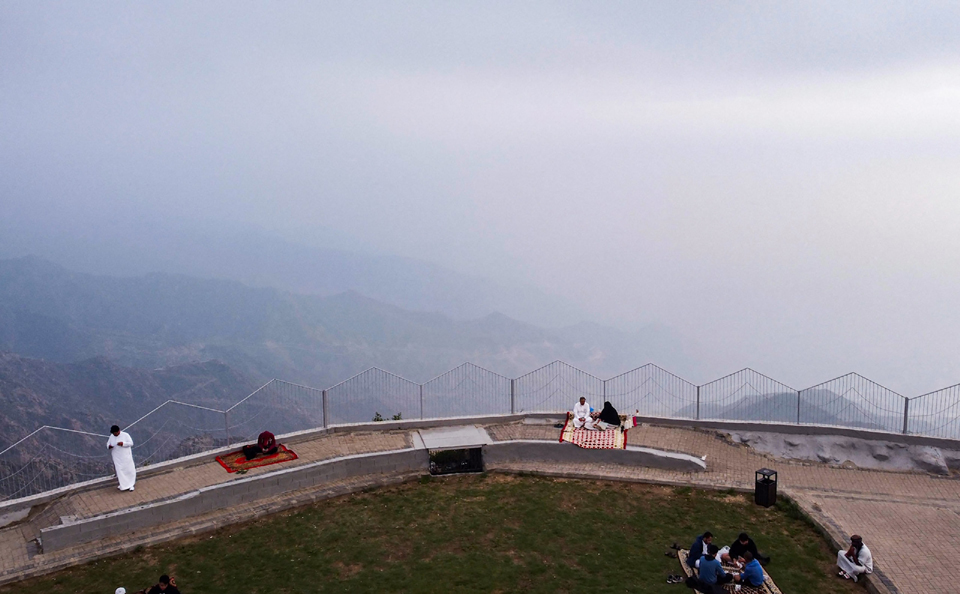 AL-NAMAS, Saudi Arabia, Aug 31, 2022 (BSS/AFP) - As Saudi Arabia swelters in
sizzling desert temperatures, some are escaping to the "City of Fog" -- a
mountainous oasis of cool where warm clothing is needed even in summer.

Sitting with friends on a picnic blanket, under light rain and a thick,
swirling mist in Al-Namas, Abdullah Al-Enizi wears a body-warmer over his
traditional white robes to guard against the chill.

The retreat, 2,800 metres (9,200 feet) above sea level in Saudi Arabia's
rugged south, is in stark contrast to other parts of the vast, largely desert
country where summer heat of up to 50 degrees Celsius (122 degrees
Fahrenheit) is an annual challenge.

At Al-Namas, humid monsoon weather keeps temperatures below 30 degrees
Celsius, dropping as low as 15 degrees Celsius at night, as fog blocks out
the sun over verdant hills.

"It's 46 degrees in Riyadh and only 20 here, it's 26 degrees lower," says Al-
Enizi at the holiday destination, about 850 kilometres (530 miles) southwest
of the Saudi capital.

"We're escaping the heat. Here, it's cool and the rain and fog are here
nearly all the time," added the semi-retired Saudi, 45, who drove about 12
hours from Riyadh.

Around his group of friends, families enjoy the breeze as their children run
around in the fresh air, rather than being cooped up in their air-conditioned
houses as is usual elsewhere in the country.

Clusters of holidaymakers in raincoats and woolly hats sip Arabic coffee and
crowd under umbrellas, while kites flutter in the wind.

"Before we came, we packed all our winter things!" says Nouf, who did not
want to give her surname, while doing up her daughter's coat.

Tourist authorities have built a "fog road" for hikers and cyclists
traversing a high summit that overlooks the mist-shrouded mountains.

Khalaf Al-Juheiri travelled to Al-Namas with his wife and children from
Tabuk, in Saudi Arabia's north, to enjoy the "cool weather".

"We really miss this weather when the temperature goes over 40 degrees in
summer" in Tabuk, said the 33-year-old civil servant, covering his head
against the rain.

In 2020, a study published by the Science Advances magazine showed that the
Gulf region had the hottest and most humid climate on the planet.

Because of global warming, some Gulf cities could become uninhabitable before
the end of this century, experts say.

Thanks to its altitude and strong winds, Al-Namas escapes the worst of the
increasing heat, says Hassan Abdullah, a Jordan-based official from the WASM
weather technology company.

It has become a prized destination at a time when Saudi authorities,
searching for new income streams apart from oil, are heavily promoting
domestic and international tourism.

The "Visit Saudi" promotion is in full swing just three years after tourist
visas were first made available for foreign visitors in 2019.

"Summer is the peak tourist season, going from May to October," says Abdullah
Al-Shahri, a hotelier at Al-Namas, where winter temperatures sometimes plunge
to zero degrees.

At the top of a hill that overlooks the green valley, Mushabab Al-Omari takes
in the view, sitting next to his wife.

"I've been here nearly three months," says the retiree, "and I'm ready to
stay another four or five months if the weather stays like this."