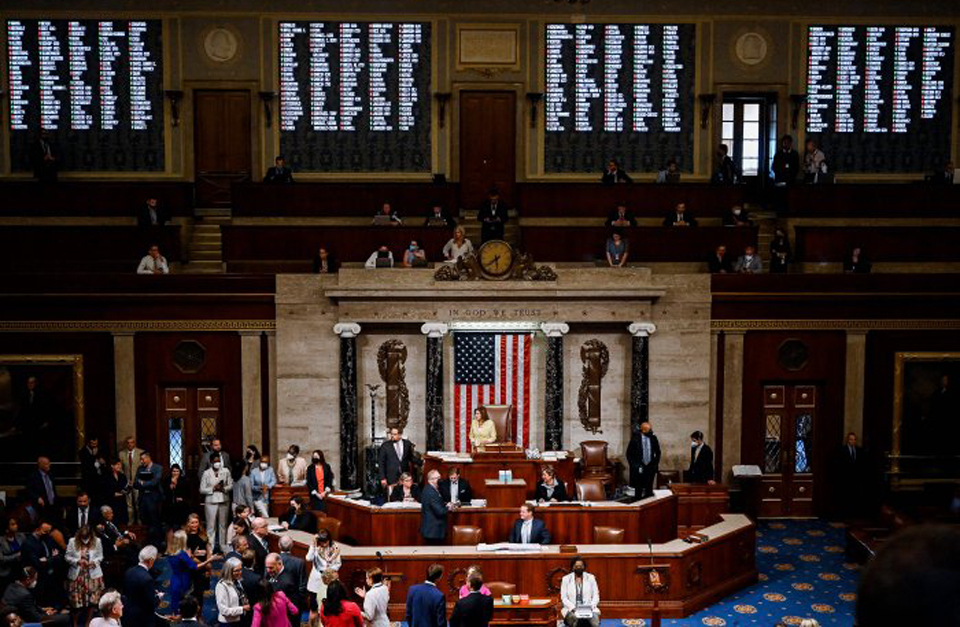 WASHINGTON, Aug 13, 2022 (BSS/AFP) - US lawmakers on Friday adopted President Joe Biden's sprawling climate, tax and health care plan -- a major win for the veteran Democrat that includes the biggest ever American investment in the battle against global warming.

Passage in the House of Representatives along strict party lines came after approval of the bill in the Senate by a razor-thin margin, with Vice President Kamala Harris casting the tie-breaking vote.

Biden quickly hailed the adoption of his plan, which includes a $370 billion investment aimed at bringing about a 40 percent drop in greenhouse gas emissions by 2030.

"Today, the American people won. Special interests lost," the president tweeted in the minutes after the vote.

"With the passage of the Inflation Reduction Act in the House, families will see lower prescription drug prices, lower health care costs, and lower energy costs. I look forward to signing it into law next week."

The vote is a clear victory for Biden on one of his top policy priorities less than three months before November's crucial midterm elections, with his Democratic Party's control of Congress in the balance.

It also should help restore a semblance of US leadership in the fight to cut carbon emissions.

In her final comments before the vote, House Speaker Nancy Pelosi called the legislation "a robust cost-cutting package that meets the moment, ensuring that our families thrive and that our planet survives."

The package includes the largest ever commitment to fighting climate change by the world's biggest economy, which is also one of the planet's worst polluters.

Climate activists rejoiced after the 220-207 vote, which earned the support of all Democrats, even progressives who had lamented that it did not go far enough.

The president of the Union of Concerned Scientists, Johanna Chao Kreilick, called the legislation "a game changer and reason for hope."

The so-called "Inflation Reduction Act" also would provide $64 billion for health care initiatives and ensure lower costs for some drugs, which can be 10 times more expensive in the United States than in some other rich nations.
Conservative lawmakers have criticized the bill as wasteful spending, and no Republican lawmakers supported it.

"Democrats are jamming through Congress a bill spending hundreds of billions of dollars our country doesn't have, on far-left policies our country cannot afford," Republican lawmaker Lee Zeldin tweeted.

Rather than attempting to punish the biggest polluters in corporate America, the bill instead proposes a series of financial incentives aimed at steering the country away from fossil fuels.

It would provide Americans with a tax credit of up to $7,500 when purchasing an electric car, plus a 30 percent discount when they install solar panels on their roofs.

The legislation would also provide millions to help protect and conserve forests, which have been ravaged in recent years by wildfires during record heat waves that scientists say are linked to global warming.

Billions of dollars in tax credits would also go to some of the country's worst-polluting industries to help their transition to greener methods -- a measure bitterly opposed by progressive Democrats who have, however, accepted this as the best option after months of inaction and frustration.

But they long ago had to give up their ambitions for free preschool and community colleges and expanded health care for the elderly.

Biden came to office with promises of sweeping reforms, but has repeatedly seen his hopes dashed, revived and dashed again.

The 50-50 split in the Senate, with Harris as the tie-breaker, has effectively given a veto to moderates such as Joe Manchin of West Virginia, who used that power to block Biden's much more expansive Build Back Better plan.

To help offset the plan's massive spending, it would reduce the US deficit through a new 15 percent minimum tax on companies with profits of $1 billion or more -- a move targeting some that now pay far less.

That measure could generate more than $258 billion in tax receipts for the government over the next 10 years, by some estimates.