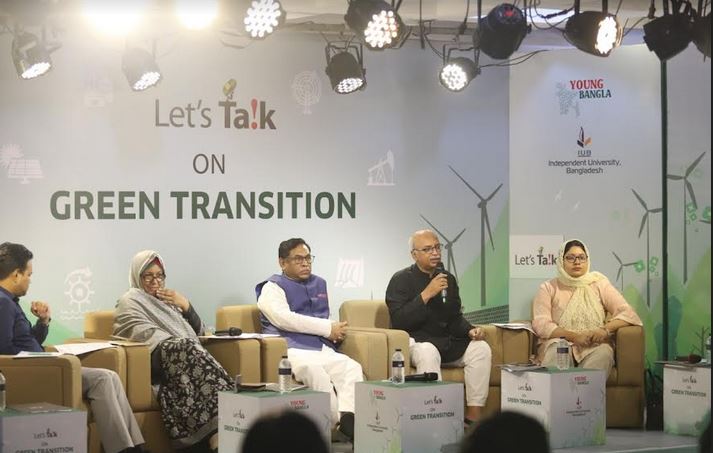 global energy situation into a turmoil with Europe is shutting down lights
and cold water for baths, Bangladesh should not be expected of escaping the
crisis and hardly was there any alternative to initiatives of the government,
said experts.

Raising a question about why the projects had not been initiated earlier,
Professor Dr M Tamim of Petroleum and Mineral Resources at BUET said: "If the
projects were taken five years back, the impact of the global crisis could
not still be averted. But, these initiatives will bring positive results in
future."

He was addressing the "Let's Talk on Green Transition", a programme which is
being organised by Awami League's research wing CRI since 2014, at
Independent University, Bangladesh (IUB) on Wednesday.

Asked if the LNG export at a high price is responsible for the crisis in the
energy sector, he said, "For energy security, mixed source is vital. That's
why, it is a right decision. The more options are there, the easier it is to
decide."

State minister for Power, Energy and Mineral Resources Nasrul Hamid, also a
trustee of think tank CRI, said after Russia had stopped its gas supply,
Germany announced a 25 percent cut down on the amount of gas they distribute.

Everyone is on the lookout for an alternative, especially for winter and the
same is about the UK, he said.

Hamid said Bangladesh witnessed load-shedding for 12 to 13 hours in 2009,
whereas now it faces power outage for a couple of hours due to a temporary
issue.

"It means that we overcame the initial crisis. In 2009, we started working on
short, medium, and long-term plans in the electricity sector. Currently, we
are pondering on another plan with the aid of Japan," he said.

The state minister said any organisation or house can save their total
electricity cost by 20 percent by connecting its solar panel to the national
grid.

"The solar panel you install in your house will produce electricity, which
will be given to us. It will be make its way to the national grid. The cost
for this amount of electricity will be deducted from your electricity bill.
Thus you can save 20 percent of your bill," he added.

Solar panel is cost-effective as 50 percent of the cost of the solar panels
installed under personal initiatives was borne by the government, he said.

Hamid said different organsations are also offering loans for the rest 50pc,
so it can be installed at a low price.

Speakers also said that the energy ministry is continuing its efforts to
search for alternative sources such as wind and biogas.

They said the new technology that took a few decades to reach here now takes
only a few months and that is why we are getting equipped to use that. More
nuclear power plants and also some hydrogen plants may also join the league
as the country is getting prepared to use those, they said.

Waseqa Ayesha Khan said the government is raising awareness on the use of
solar panel as renewable energy.

"We've already undertaken the initiative of setting up charging stations for
e-vehicles. It will be a paradigm shift. You will pay 10 Taka for the path,
for which you previously paid 80 Taka," Nasrul Hamid said, adding that public
vehicles including buses, trains, and cars, will be prioritized in the policy
of e-vehicle.

Asking not to worry about the waste management of the nuclear power plant, Dr
Tamim said in a jocular tone that those who would supply the fuel for the
nuclear station would also take care of the waste. "That is how the contract
is made. So don't worry."

Nasrul Hamid said: "The base amount of our total power production should be
green based. That is the target we are working on. Currently, our base is
12,000 megawatts. It will be increased gradually."

He said August 9 is considered as a historic day for the sector of power and
energy sector as Father of the Nation Bangabandhu Sheikh Mujibur Rahman
nationalised five gas fields by paying four billion pounds in 1975.

That visionary move has made a contribution worth more than 400 billion
pounds and is still doing so, he mentioned.

Let's Talk is a programme organised by CRI since 2014 to connect youths with
the country's policymakers so that their ideas and thoughts can create an
impact.