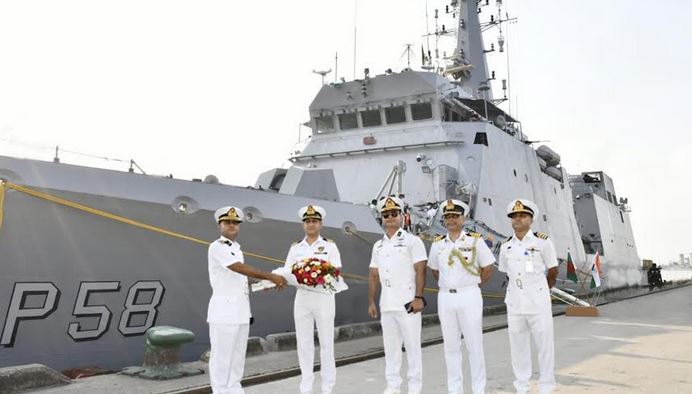 KHULNA, May 25, 2022 (BSS)-With the participantion Bangladesh and Indian Naval War Ships, fourth Coordinated Patrol (CORPAT) and bilateral treaty rehearsal (BONGOSAGOR) has been continuing at the selected teritory of the Bay of Bengal.

Under the supervision of Flotila West, two warships namely‘INS KORA‘ and‘INS SUMEDHA‘ of India and two warships ‘BNS ALI HAIDER‘ and ’BNS ABU UBAIDAH‘ of Bangladesh are jointly patroling and rehearsaling from May 22. It will continue till May 27, an ISPR release said here yesterday.

Turning both the countries warships will return to their own naval fleet on May 27, the press release said, after completion of Coordinated Patrol of the two Indian warships have already anchored at the Mongla Port jetty yesterday.

A disciplined and colourful banned party of Bangladesh Navy welcomed their counterparts Indian Navy with mass enthusiasm and naval heritage during their arrival. Commadar of Mongla Naval Base, on behalf of the commanding Officer of Khulna Naval Zone, welcomed two Indian war ships at the port jetty. High officials of Bangladesh Navy and representatives from Indian Highcommission were present at the event, the release added.

To check various criminal activities including illigal netting of fish, smuggling, robbery, trafficking and drug trading from sea routes, both the countries have started patrol and reheasal at the selected teritory of the Bay, said the press release, adding that it will play a vital role to curb crimes, to face regional security of the Bay and development of blue economy of both the countries.