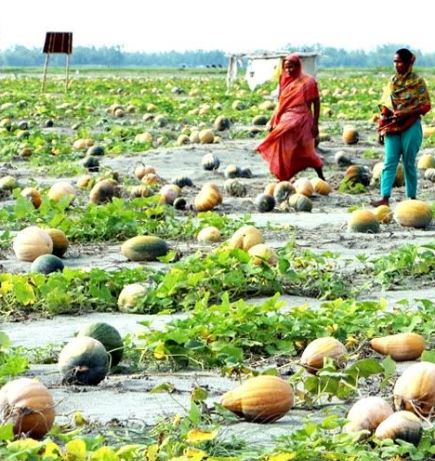 DHAKA, May 23, 2022 (BSS) - Rafia (a pseudonym) was married off nine years ago when she was a student of HSC first year. Her husband Md Mosharraf, did a job at a private company in the capital city Dhaka. Just after two-year of marriage, Mosharraf become paralysed due to a fatal road accident. The family of Mosharraf did all they could do to help him recover spending huge money, but he did not get well.

After his treatment, they became absolutely penniless. Even, they sold some pieces of land they owned for treatment purposes. Rafia, who used to live in char area in Gaibandha Sadar upazila, became helpless as she didn't understand as to what to do.

One day a NGO worker visited her house. The worker suggested her to do farming specially pumpkin cultivation on the sandbars in dried-up riverbeds and char areas.

As per the suggestion, she started cultivating pumpkin at their own lands. In the first time, she earned Taka 25,000. Later, she expanded the area of cultivation.

Officials of the Department of Agricultural Extension (DAE) and NGOs said pumpkin cultivation in relay methods with other crops on the silted-up riverbeds and char lands in all five districts of Rangpur region is expanding during the last eleven years.

Some 50,000 char families, living by the riversides and in char areas of Rangpur, Kurigram, Lalmonirhat, Nilphamari and Gaibandha districts of Rangpur agriculture region, have changed fortune through pumpkin cultivation on the sandbars.

Senior Coordinator (Agriculture and Environment) of RDRS Bangladesh Agriculturist Mamunur Rashid said cultivation of pumpkin along with other winter crops in relay-method continues improving livelihoods of many char people.

He said some 25,000 char families have expanded pumpkin cultivation on char lands adopting intercropping methods in about 300 char villages of the agriculture region with the assistance of RDRS Bangladesh alone.

Manager (Agriculture) of Practical Action Bangladesh (PAB) Agriculturist Nirmal Chandra Bepari said over 23,000 char families with the support of the DAE and PAB have expanded pumpkin cultivation on sandbars in 200 char villages since 2009.

They have spent Taka 15,000 on an average each for cultivating pumpkin on 200 sandbars each this season to sell the produce at Taka 40,000 to earn a net profit of Taka 25,000 by each of them after completing harvest by next month.

Rafia said she has cultivated pumpkin with other crops like banana, onion, garlic, vegetables, green chilli, potato and brinjal on char lands this time.

Kawnia Upazila Agriculture Office sources said many char villagers have become self-reliant by cultivating pumpkin along with sweet potato, banana and other crops on the sandbars.

Farming cost of pumpkin is low and farmers reap more profit from its cultivation on the sandbars, the sources added.