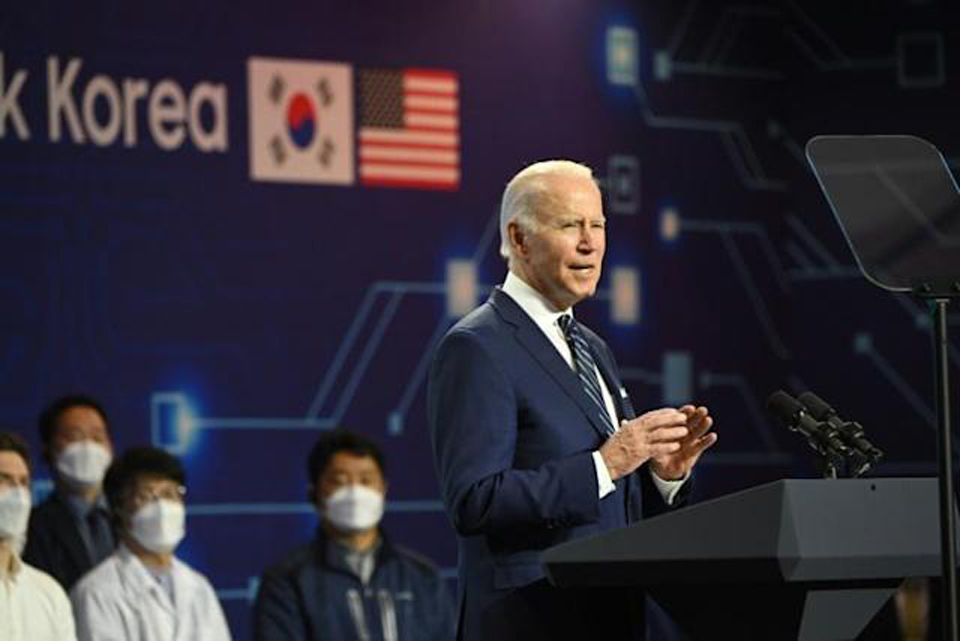 Biden's first trip to Asia as president is being overshadowed by what a US official called "sabre rattling" from across the heavily fortified border in North Korea, which the White House believes might use the high-profile moment to test either a nuclear-capable missile or explosive.

"From our standpoint, we are ready," the senior US official told reporters traveling with Biden on condition of anonymity.

In Washington, State Department spokesman Ned Price said what the US government sees as a possible "provocation" is a real risk.

"We remain concerned that the DPRK may attempt to undertake another provocation during the course of the president's visit to Northeast Asia or in the days following," Price said, referring to North Korea by its official acronym.

South Korean intelligence has also warned that Pyongyang had recently completed preparations for a nuclear test.

Biden was beginning his day by paying respects at a cemetery for soldiers killed defending South Korea during the Korean War.

He then holds talks and a joint press conference with Yoon before they meet again for a state dinner.

Biden travels to another key US ally in the region, Japan, on Sunday.

The US official said that in addition to tensions over North Korea and the US-led campaign to punish Russia for invading Ukraine, Biden's main focus Saturday was on establishing "a strong personal relationship" with Yoon, who is less than two weeks into his presidency.

Like Japan, South Korea is seen as a key player in US strategy to contain China and maintain what Washington calls the "free and open Indo-Pacific."

The two leaders will "highlight how much we have in common, how similar our viewpoints are on a very wide range of issues, how close the two countries are and how much we expect them to come closer," the official said.

Biden's Asia trip "is about demonstrating the unity and resolve constructed and coordination between our closest allies," they added.

Biden began his trip late Friday with a tour, accompanied by Yoon, of a massive Samsung semiconductor factory. Relations between the two leaders "got off to a very good start," the US official said.

In his first remarks on arrival, Biden said the US-South Korean alliance is "a linchpin of peace, stability and prosperity" and highlighted the Samsung plant's role in maintaining the fragile global supply chain for semiconductors.

The chips are a vital component in almost every piece of sophisticated modern technology, and South Korea and the United States need to work to "keep our supply chains resilient, reliable and secure", Biden said.

For the US leader, whose Democratic Party fears a possible trouncing in midterm elections in November, snarled supply chains are an acute domestic political challenge, with Americans increasingly frustrated over rising prices and setbacks in the post-Covid pandemic recovery.

In the southern US state of Georgia, the governor also announced Friday that South Korean auto giant Hyundai will build a $5.5 billion plant to produce electric vehicles and batteries -- another big priority in Biden's vision for putting cutting edge technology at the heart of US industrial strategy.

Adding to the uncertainty about what's happening in North Korea, the isolated country is going through a major outbreak of Covid-19.

How the crisis impacts Kim Jong Un's decision on nuclear tests is one of the many unknowns that US and South Korean officials are weighing.

"We are very concerned about the Covid situation in the DPRK," the US official said.

"We're very sensitive to the fact that they appear to be facing quite a serious situation. And I think you've seen we stand ready to work with others in the international community as needed to provide assistance."

"Should Kim proceed with a test during Biden's visit, he will effectively be helping the two countries find greater justification to work together on the North Korea issue," she said.

In Japan, Biden will meet with Prime Minister Fumio Kishida and the emperor. On Tuesday, he will join a regional summit of the Quad -- a grouping of Australia, India, Japan and the United States.