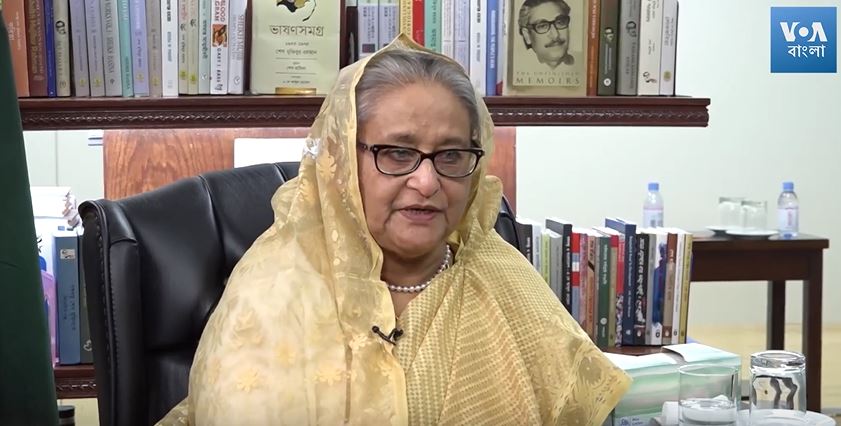 DHAKA, Sept 28, 2022 (BSS) - Prime Minister Sheikh Hasina has said everyone needs to understand the reality that the forcibly displaced Rohingyas are becoming a huge burden for Bangladesh and they must go back home.

"They (Rohingyas) need to go back to their own country. Everyone needs to understand (the situation). ---it is not possible for us to take any more people, Rohingyas must go back," she said in an interview with the Bangla service of Voice of America (VoA) in Washington which was broadcast on Tuesday.

Referring to Bangladesh's repeated call to the international community for safe and sustainable rehabilitation of the Rohingyas, she said it is impossible for a country alone to take responsibilities of such a huge population (1.2 million of Rohingyas).

"Not only giving shelters, but also arranging livelihoods for such a huge population is a great responsibility which no country can shoulder alone," she said.

She mentioned that the entire world has now been rattled due to the Russia-Ukraine war, sanctions, counter sanctions and the ongoing Covid-19 and the prices of essentials are skyrocketing which put the global people to immense sufferings.

"Those who came forward to help (Rohingyas), are now facing troubles over own survival," she said, adding that how much Bangladesh could do for the Rohingyas when this country has a huge population and it has to think of its people.,

The Prime Minister said the children and teens of the Rohingya community are now brought up in a vast slum (Rohingya camp) where the scope of raising with humanitarian values and with sound health is very limited.

Bangladesh is not in a position to take any more people from Myanmar, she said, adding that Rohingyas should go back to their own country.

The Prime Minister said the prolonged stay of the Rohingyas in Bangladesh destroyed forests in Cox's Bazar.

Alongside destroying the natural beauty, the huge numbers of Rohingyas caused immense sufferings to the locals while the arable lands of the locality are declining sharply, she said.

Besides, she said, many Rohingyas have got involved in smuggling of drugs and arms smuggling alongside human trafficking and they have involved in conflicts within themselves inside the camps.

About giving shelter to such a huge number of Rohingyas, the premier said she has given shelter to the Rohingyas thinking about the agony of the people of then East Pakistan (now Bangladesh) when they had gone through inhuman tortures, including killings and rapes, during the Liberation War of 1971.

"Can't you take responsibilities of several lakh people in addition to your 16 crore countrymen," she said, quoting Sheikh Rehana as saying.

The Prime Minister said she replied in affirmative, saying that if necessary the Bangladeshi people would take one meal a day and share another meal with the Rohingyas.

She said Bangladeshi people, particularly the leaders and activists of the Awami League, stood beside the Rohingyas with plenty of food while the international community later came forward and started to help the Rohingyas.

The Prime Minister said Bangladesh has a human rights commission and they are investigating the allegations of human rights violations.

“We are always investigating (into the allegations). Due legal action is taken in case of any human rights violation even it is committed by any member of law enforcement agencies, which was not seen in the past,” she said.

Pointing at the wholesale allegations made by the BNP, she said they had submitted a list of 70 people (allegedly disappeared) after talking much about it.

Most of the listed people were later found in the BNP’s processions while some others went into hiding for personal reason while seven cases were found that they had died, she said.

The Prime Minister said Ziaur Rahman, founder of the BNP, had killed hundreds of air force-army officers and soldiers alongside huge number of Awami League leaders and activists.

The bodies of the victims were never found while the relatives of them even did not know what were their faults, she said.

The people who are now talking about human rights violation, people even could not be able to seek justice, she said.

Sheikh Hasina has said that the numbers of media is mushrooming during the Awami League tenure and they are enjoying freedom.

“After saying everything, if someone says that he or she is not allowed to speak, what would be the answer? That’s what I’d like to know,” she said,

The Prime Minister said there were only a few TV and radio stations before the Awami League assumed power in 1996, adding that those were even controlled by the then government.

She mentioned that she allowed the private sector to run the media after coming to power, saying that 32 private television channels are now operational among the approved 44 TV channels in the country.

People are taking part in television talk shows and they speak freely – true or false – and they criticize the government, she said.

The Premier reiterated that said there was no freedom of speech or movement during the military dictatorship.

EC is independent to hold free and  fair elections

Sheikh Hasina said her government has taken every measure to make the election commission (EC) independent as they can hold elections in a free and fair manner.

The Prime Minister said they have enacted a law for forming the election commission which has been formed in accordance with the law.

The election commission was under the purview of the Prime Minister’s office and her government has made it free from its authority and allocated a separate budget for them to give the commission financial independence.

Now the government cannot interfere in the commission’s budgetary process and it is independent to spend  its money at its will, she said.

The then BNP government even prepared the voter list with 1.23 crore fake voters aimed at manipulating the election, she said, adding that they held voter-less February 15, 1996 national polls with taking part no political parties and Khaleda Zia had ousted  from the power within one and a half month of the election,

The BNP and Jatiya Party were formed by two military dictators after coming to power by violating the country’s constitution, she said.

The Prime Minister said they would not allow anymore to play ducks and drakes with the voting rights of the masses as the Awami League had established the rights of franchise through struggle.

She said the people will choose their government by casting their votes,   adding that she has nothing to say  if they do not vote for the Awami League.