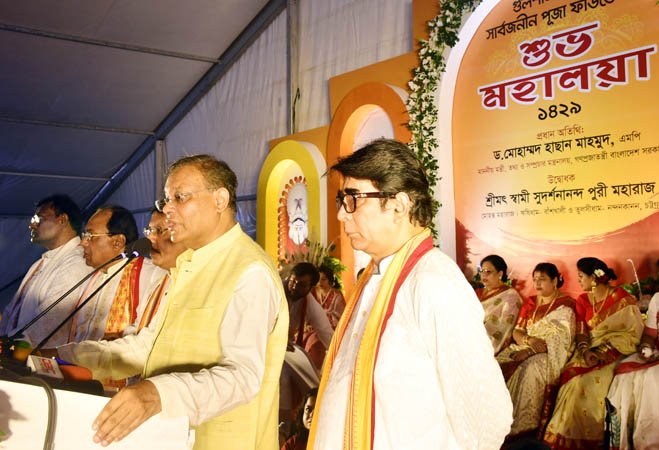 DHAKA, Sept 25, 2022 (BSS)- Information and Broadcasting Minister Dr Hasan Mahmud today said the communal evil forces should be resisted to strengthen the non-communal spirit of Bangladesh based on which it was established.

“The essence of all religions whatever it Hinduism, Buddhism, Islam and Christianism is for the wellbeing of all people. The world will be more peaceful if we believe in the essence of the religions and practicing it,” he said.

The minister said this while addressing the inaugural function of Shuvo Mahalaya at Banani Puja Mandap here this morning.

Hasan said everyone should resist the evil communal forces who try to spread sectarianism. The country has been created in exchange for blood of all people in 1971 and the nation will reach its desired goal with the pledge of communal harmony, he added.

He said it is regrettably true that the spirit based on which the country had been formed was attacked through the brutal assassination of Father of the Nation Bangabandhu Sheikh Mujibur Rahman in 1975.

Attempts were also made to turn the country into a communal state, said Hasan, also Awami League joint general secretary.

The minister said Prime Minister Sheikh Hasina is working relentlessly to cement the non-communal spirit. But a vested quarter is hatching conspiracy against the country till now, he added.

He said the government is taking tougher actions against those plotters.

Hasan also urged all to remain alert against the conspirators.

The minister said the number of puja mandap has been increasing every year and the reason of increasing its number is that the enthusiasm and ability of the people have also shot up. “The government also stands with you,” said Hasan.

He hoped that the puja would be celebrated in a festive mood across the country. “I hope that the pleasure of the festival will strengthen communal harmony among us … it is my prayers and wishes,” he added.