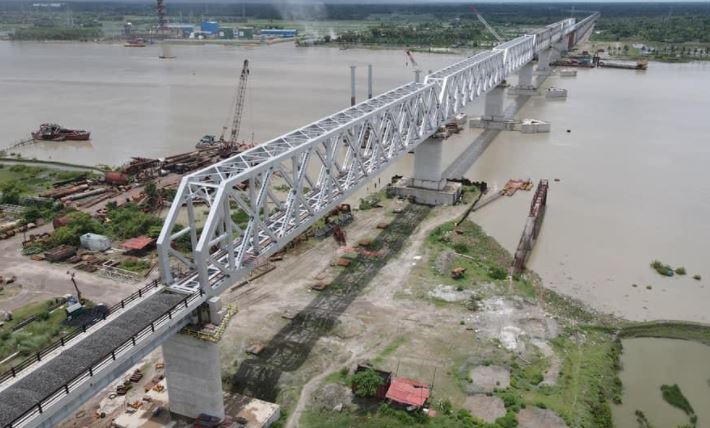 DHAKA, July 3, 2022 (BSS) - The Rupsha Rail Bridge as part of the Khulna-
Mongla Port Rail Line Project has been completed under the Indian Line of
Credit (LOC) extended to the Bangladesh government.

The bridge has been constructed over the Rupsha tidal river that was a
challenging engineering feat as it required specialized base grouting
technology for piling work, the release said.

The bridge has also additional features such as navigation fenders piles
upstream and downstream of the pier, for ensuring navigation safety in the
river.

The navigational clearance for the main bridge is more than 18-meter from
Standard High-Water Level (SHWL).

The construction materials for the steel bridge superstructure were imported
from India using road, sea and inland rivers.

The Rupsha railway bridge and the Khulna-Mongla port rail line will greatly
facilitate transportation of goods and the enhanced connectivity and
accessibility to the Mongla Port, said the high commission.

Besides, the bridge will improve market access for local businesses including
for agricultural produce by the farmers in the region.

It is also expected to positively impact tourism to prominent spots in the
south-western part of Bangladesh.

Government of India has extended four LOCs to Bangladesh government worth
7.862 billion US dollars.

So far, 42 projects have been taken up under the LOCs, of which, 14 projects
have been completed and the rest are at various stages of implementation,
according to the Indian mission.