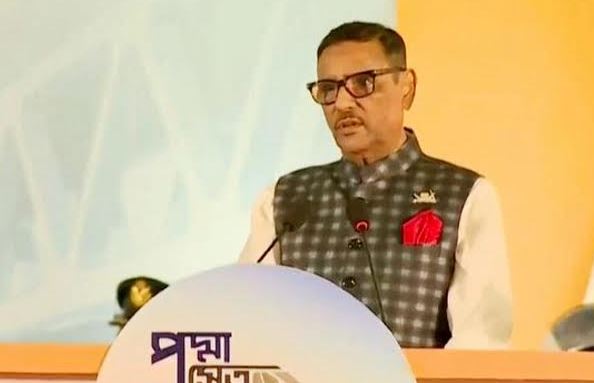 DHAKA, June 25, 2022 (BSS) – Road Transport and Bridges Minister Obaidul Quader today said the nation has taken revenge of its insult by constructing the Padma Bridge connecting the country’s 21 southwestern districts with the capital.

“It is very much truth that we have taken revenge of dishonor showed by the international community to us, by constructing a 6.15-kilometer long multipurpose bridge,” he said.

Quader, also general secretary of the ruling Awami League, made this remark while chairing a public rally organized at Mawa point under Munshiganj marking the opening of the Padma Bridge this morning.

Lauding the role of the Prime Minister, the road transport minister said, “The whole nation is now saluting you as you have proved your capability by constructing the bridge on the mighty river Padma with your own fund.”

Sheikh Hasina has never surrendered and also proved that the Bangalee is a nation of ‘heroes’ by ignoring heinous conspiracy designed by national and international quarters, Quader told the rally.

The evil forces had not only insulted the prime minister, but also insulted PM’s younger sister Sheikh Rehana, Swajib Wazed Joy, Saima Wazed Putul and Rehena’s son Radwan Mujib Siddiq Bobby, he said, adding: “But what was the wrong with her [Prime Minister’s] and her other family members.”

The international community dishonored the Bangalee nation by withdrawing them from the project and even made an allegation of corruption, Quader mentioned.

Mentioning that the construction of the Padma Bridge was challenging, the ruling party leader said, “None deserves any credit of building this bridge except Prime Minister Sheikh Hasina. Peoples across the country had a demand to involve the name of Sheikh Hasina with the bridge, but she rejected,” he added.

“If there was no such committed person like Sheikh Hasina then we never could overcome the crisis and hindrances prevailing on the way of bridge construction,” he said in his address.

Recalling the sacrifices made by the people living on the banks of the Padma, the bridges minister said, “We are expressing gratitude to those people who had given up their belongings in the interest of the Padma Bridge responding to the appeal made by Prime Minister Sheikh Hasina.”

Earlier, Prime Minister and Awami League President Sheikh Hasina joined the Padma Bridge opening ceremony. The PM flew by a helicopter from Dhaka and reached the Mawa point at 10am.