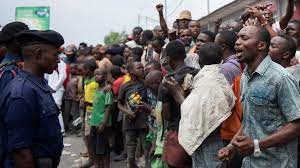 BENI, DR Congo, Aug 12, 2022 (BSS/AFP) - Unidentified gunmen killed four
policemen in Butembo in eastern Democratic Republic of Congo on Friday, the
army said, during a protest against insecurity in the troubled region.

The town's military commander Colonel Mozebo E'pape said armed men had
blended in with the crowd of protesters and then shot at policemen who were
supervising the demonstration.

"The provisional toll is four policemen killed by these assailants," he
added.

Kivu Security Tracker, a respected monitor of violence in eastern DRC, said
at least two police officers had been killed during unrest in Butembo.

AFP was unable to independently confirm the death toll.

"The situation is serious at the moment," said Mathe Saanane, the head of a
network of civil society groups in Butembo, adding that an unidentified armed
group appeared to have infiltrated the town.

Residents had been protesting insecurity, in a demonstration that occurred
two days after the Allied Democratic Forces (ADF) rebel group freed over 800
inmates from a prison in Butembo.

ADF fighters had also killed two police officers during the attack on the
prison on Wednesday.

Over 120 militias roam the DRC's mineral-rich but volatile east, where
attacks on civilians are routine.

The ADF -- which the Islamic State group claims as its Central African
offshoot -- is among the most violent armed groups in the region.

It has been accused of massacring Congolese civilians as well as staging
attacks in neighbouring Uganda.