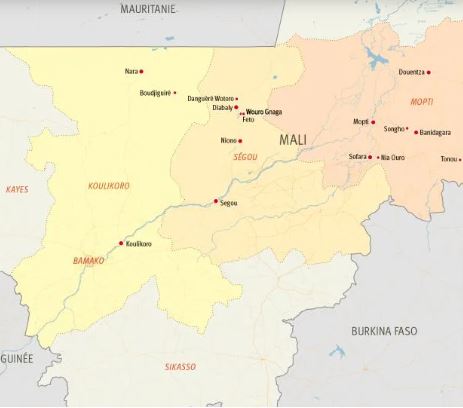 BAMAKO, Aug  6, 2022 (BSS/AFP) - At least 12 civilians have been killed in
Mali by suspected jihadists who lured victims into a bomb attack, two elected
officials and a police source told AFP on Saturday.

"The jihadists first killed two civilians in Ouakan (a town near Bankass in
central Mali) before rigging their bodies" with explosives, an elected official
from a nearby town told AFP on condition of anonymity.

"When the parents and relatives of those killed came to look for the
bodies, there was an explosion and at least ten other people were killed," the
person said.

Another elected official in the region confirmed the reports of the Friday
attack, saying "several other civilians are currently missing in Ouakan".

"The bodies of the two civilians were rigged by the jihadists", the
official said. "They exploded when their parents and relatives came to look for
the two bodies -- there are at least a dozen dead".

A regional police official told AFP "arrangements are being made to ensure
the safety of the local population" and would be put in place from today.

"The jihadists are increasingly using criminal methods", he went on. "They
rigged bodies in Ouakan, which were later blown up".

Mali, epicentre of a bloody 10-year-old jihadist campaign across the
region, underwent coups in August 2020 and May 2021, creating a political
crisis to coincide with the security crisis