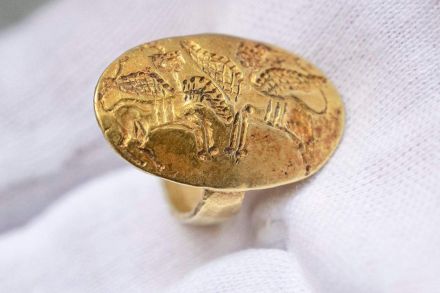 ATHENS, May 20, 2022 (BSS/AFP) - Greece's culture ministry on Friday said
the Nobel Foundation in Sweden had returned an ancient gold ring stolen from
the island of Rhodes during World War II.

The Mycenaean signet ring, marked with a pair of winged sphinxes, was
formally returned at a ceremony in Stockholm on Thursday, the ministry said.

It had been found in Rhodes during a 1927 excavation at a Mycenaean
necropolis by the Italian School of Archaeology, at a time when the island
was under Italian control.

The ring was stolen during World War II from the local archaeological museum
alongside other antiquities that have yet to be recovered, the ministry said
in a statement.

It eventually surfaced in the United States, purchased by Hungarian Nobel
prize-winning biophysicist Georg von B‚k‚sy, whose collection was acquired by
the Nobel Foundation following his death in 1972.

The ring was kept at the Stockholm Museum of Mediterranean and Near Eastern
Antiquities. Its identity was confirmed in 1975 by the museum's then
director, archaeologist and Mycenaean era expert Carl Gustaf Styrenius.

The ring will return to the Rhodes archaeological museum, the ministry said.

The Mycenaean era was the last phase of the Bronze Age in ancient Greece,
spanning the period from approximately 1600 to 1100 BCE.