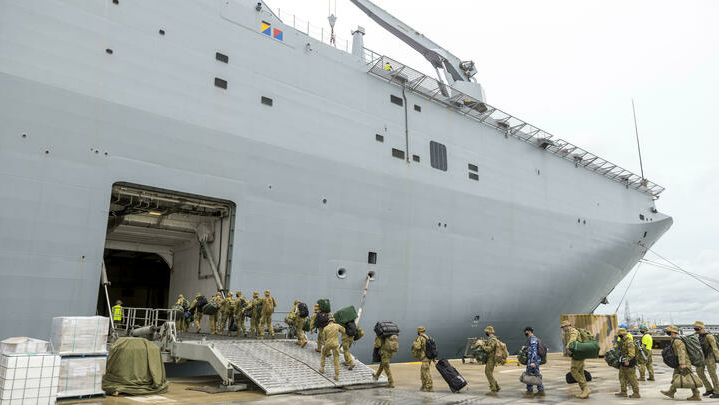 Tonga's Health Minister Saia Piukala said the crew of the HMAS Adelaide
would follow drastic health rules to ensure the remote Pacific kingdom
remains one of the few places on the world still free of coronavirus.

"The ship will berth and no contacts will be made. Australians from the
ship will unload their cargoes and sail from port," he told reporters.

The Adelaide was deployed as part of an international aid effort after the
January 15 eruption that generated huge tsunami waves and blanketed the
island nation in toxic ash.

The warship is carrying about 80 tonnes of relief supplies, including
water, medical kits and engineering equipment.

Despite all crew members testing negative before departure from Brisbane,
officials in Canberra on Tuesday said 23 Covid-19 cases had been detected on
the vessel.

Piukala said the number had increased to 29 by Wednesday.

The ship's 600-plus crew are fully vaccinated and the Australian Defence
Force said Tuesday that the initial 23 patients were asymptomatic or only
mildly affected.

It said the ship has a 40-bed hospital, including operating theatres and a
critical care ward.

Piukala said contactless protocols were being applied to all relief
supplies, including the HMAS Adelaide, meaning all goods offloaded from
foreign planes or ships were left in isolation for three day before Tongans
could handle them.

Tonga closed its borders in early 2020 as the coronavirus pandemic swept
the globe.

Since then, the nation of 100,000 has recorded just one case of Covid-19, a
man who returned from New Zealand in October last year and has since fully
recovered.

However, the devastating blast from the Hunga Tonga-Hunga Ha'apai volcano,
which lies about 65 kilometres (40 miles) north of the capital Nuku'alofa,
has created what the Tongan government describes as an "unprecedented
disaster".

Entire villages were washed away by tsunamis, while ash has poisoned water
supplies and destroyed crops.

Remarkably, there have been only three reported fatalities, which the UN
humanitarian agency OCHA said was thanks to effective early warnings issued
by the Tongan government.

OCHA said communications severed when the volcano blew were slowly being
restored and assessment teams were visiting hard-to-reach areas to gauge the
full scale of the disaster.

It said 85 percent of Tonga's population had been affected, with access to
safe water, ash clearance and food supplies the main priorities.