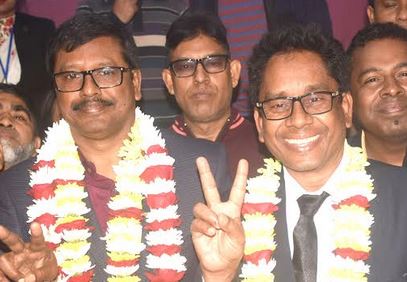 Advocate Saiful, also the president of city unit of Awami League, made a record by electing Khulna BAR president for the fourth times and S M Tarique Mahmud elected GS for the second times.

Among 1,387 registered voters, 1,184 casted their votes in the election.
Chairman of a three-member election conducting committee Advocate Liakat Ali Molla announced the result last mid-night after counting all the votes.

According to the results, Saiful won as the president bagging 1,060 votes and Tara won as the general secretary getting 978 votes.

On Saturday, the BNP-Jamaat backed panel at a press conference at Khulna BAR premises boycotted the election alleging partial behavior of the chairman of the Election conducting committee in favour of Bangabandhu Awami Ainjibi Parishad panel.