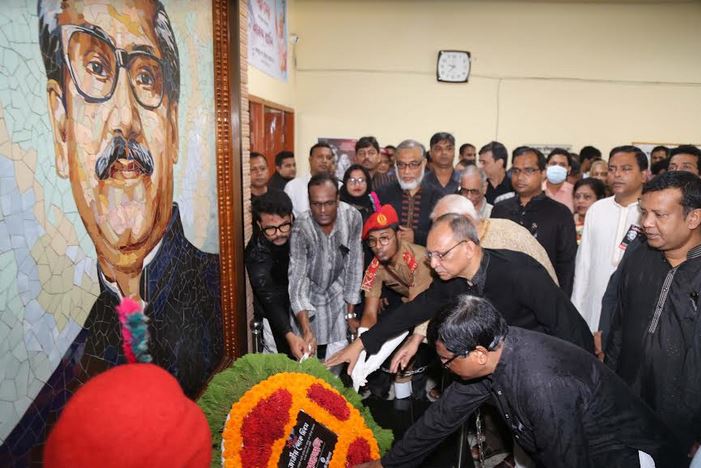 RAJSHAHI, Aug 15, 2022 (BSS) -The National Mourning Day and the 47th martyrdom anniversary of Father of the Nation Bangabandhu Sheikh Mujibur Rahman was observed in this divisional city and its adjoining districts today with due respect and solemnity.

City unit of Bangladesh Awami League and its front organisations garlanded the portrait of Bangabandhu paying rich tribute to him at the Bangabandhu mural at C&B Crossing and the city unit office.

Afterwards, they took out a large mourning procession and paraded the main city streets.

General Secretary of Workers Party of Bangladesh Fazley Hossain Badsha, MP, paid homage to Bangabandhu by placing a wreath at the Bangabandhu mural in the city.

At 8:30 am, district judgeship, bar association and public prosecutors jointly took out a mourning procession and paraded the district judge court premises followed by a brief discussion.

At 9:30 am, the district administration brought out a mourning procession from the premises of Shaheed AHM Kamaruzzaman Central Zoo and Park. The rally ended at Shilpakala Academy Auditoriun where a discussion and Doa Mahfil was held.

A large number of people including government and non- government officials, freedom fighters, political leaders and socio-cultural activists were present at the meeting.

Local units of Bangladesh Awami League hoisted the party flags half-mast in the morning and placed wreaths at the portrait of Bangabandhu Sheikh Mujibur Rahman.

Discussion on the life and works of Bangabandhu were also arranged at all schools, colleges, madrasas and special milad mehfils and prayers are being held at all religious institutions.

The upazila administration and upazila units of AL and its front organisations and Muktijoddha Sangsad have also arranged day-long programmes to observe the day.