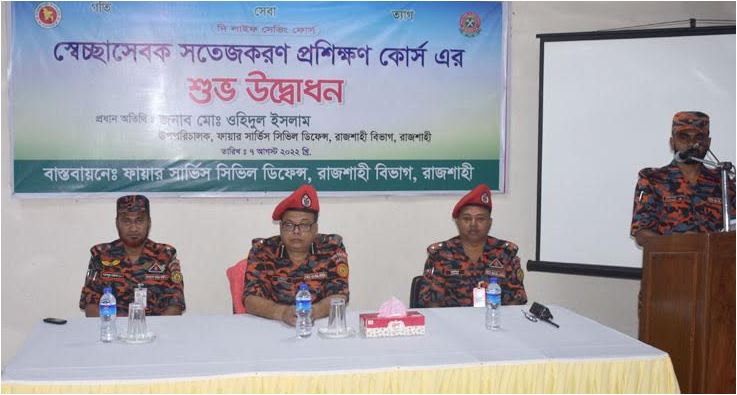 RAJSHAHI, August 8, 2022 (BSS) - Generating more volunteers from the public in general, particularly the students and youths, can be the best way of reducing losses caused by different types of disasters.

To decrease the loss of lives and properties from disasters, including earthquake, Fire Service and Civil Defence, Rajshahi Division has decided to form volunteer teams who will work to rescue the possible earthquake hit people.

The observation came at a daylong community volunteers intensifying training workshop hosted by the divisional office of Fire Service and Civil Defense (FSCD) held at its training room here on Sunday.

Wahidul Islam said many of the volunteers extend their support during the time of any disaster side by side with the FSCD people.

At present, many modern equipment and machinery were added to the FSCD. So, time has come to disseminate ideas about the operation of modern machines to the volunteers.

In addition to the daylong training, follow-up and refreshers training for the volunteers is very important.

He mentioned that many of the buildings in the city are vulnerable to earthquakes as those were not built following the earth-quake resistance rule. An earthquake measuring 7.0 magnitudes on the Richter scale would destroy those.

To decrease the loss of lives and properties from the earth quake, FSCD has decided to form volunteer teams who will work to rescue the possible earthquake hit people.

Islam said it is quite impossible to rescue the victims after a massive earthquake by existing firefighting equipment and the man power. For this reason, the FSCD has decided to train 6,000 community volunteers in the city.

Under this arrangement, two hundred volunteers will be trained in each ward, he added. At the first stage of the training, the most vulnerable areas to earthquakes will be identified.