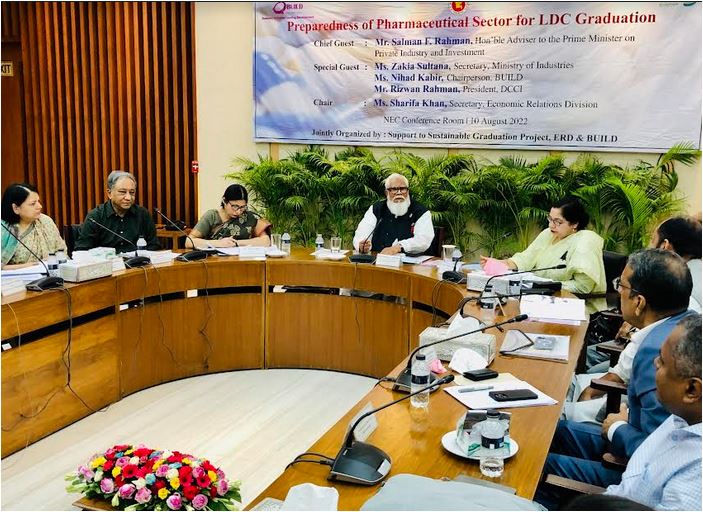 DHAKA, Aug 10, 2022 (BSS) - The Bangladesh Patent Law 2022 should be amended in line with the changing scenario for the local pharmaceutical industry after the country’s LDC graduation, said experts at a seminar in the capital today.

Simultaneously, they also called for close collaboration between the concerned government agencies and the private sector in the amendment process.

Such observation came from a seminar on ‘Preparedness of Pharmaceutical Sector for LDC Graduation’ jointly organized by Support to Sustainable Graduation Project (SSGP) of Economic Relations Division (ERD) and Business Initiative Leading Development (BUILD) in the capital, said a press release.

Adviser to the Prime Minister on Private Industry and Investment Salman F. Rahman was the chief guest at the seminar.

Secretary of the Ministry of Industries Zakia Sultana, Chairperson of BUILD Nihad Kabir and the President of Dhaka Chamber of Commerce and Industry (DCCI) Rizwan Rahman attended the event as special guests with ERD Secretary Sharifa Khan in the chair.

The release said the burgeoning pharmaceutical sector of Bangladesh has witnessed exponential growth over the last few decades. The TRIPS waiver for least developed countries (LDCs) under the WTO-TRIPS agreement is one of the key drivers of such impressive growth.

The industry has strong potential to accelerate its growth and create a bold footprint in the global market. Appropriate measures following an action-oriented roadmap are critical to tapping these opportunities and shielding against the erosion of waivers under the TRIPS agreement in the wake of the LDC graduation of Bangladesh in November 2026.

In this context, the seminar was organized to take stock of the initiatives and preparedness that are already underway to address the challenges of the loss of TRIPS waivers.

Adviser to the Prime Minister Salman F. Rahman, in his speech, called for engaging lobbyist firm in the World Trade Organization (WTO) for the continuation of TRIPS waiver for Bangladesh after graduation. He also emphasized on quick operationalization of API (Active Pharmaceutical Ingredients) parks.

ERD Secretary Sharifa Khan called for a stronger partnership between the public and private sector for preparing the pharmaceutical industry for the post-graduation phase.

Secretary of the Ministry of Industries Zakia Sultana assured that the government would work in close collaboration with the private sector in amending the current patent law of the country.

Speaking on the occasion, President of Bangladesh Association of Pharmaceutical Industries (BAPI) Nazmul Hassan, MP, said that the issues of affordability and public health should be taken into consideration while granting patent under the patent law of the country.

President of DCCI Rizwan Rahman said that the government should set up "Biotech Park" and "Genome Valley" to facilitate biotechnological research. He also called for giving incentives to pharmaceutical sector like RMG sector.

Senior Vice President of BAPI & Managing Director of Incepta Pharmaceuticals Ltd. Abdul Muktadir, in his presentation, called for negotiating with WTO for extending the TRIPS transition period relating to pharmaceutical products for Bangladesh until January 1, 2033, even if the country graduates from the LDC status.

Professor of the Department of Law of the University of Dhaka Dr. Mohammad Towhidul Islam, in his presentation, said that Bangladesh may request the WTO for country-specific TRIPS waiver for Bangladesh.

Farid Aziz, Additional Secretary of ERD and Project Director of SSGP welcomed the participants, while Ferdaus Ara Begum, CEO, BUILD gave the vote of thanks on the occasion.

Representatives from BAPI, high level officials of leading pharmaceutical companies as well as key stakeholders across the government, private sector, and think-tank participated in the event.