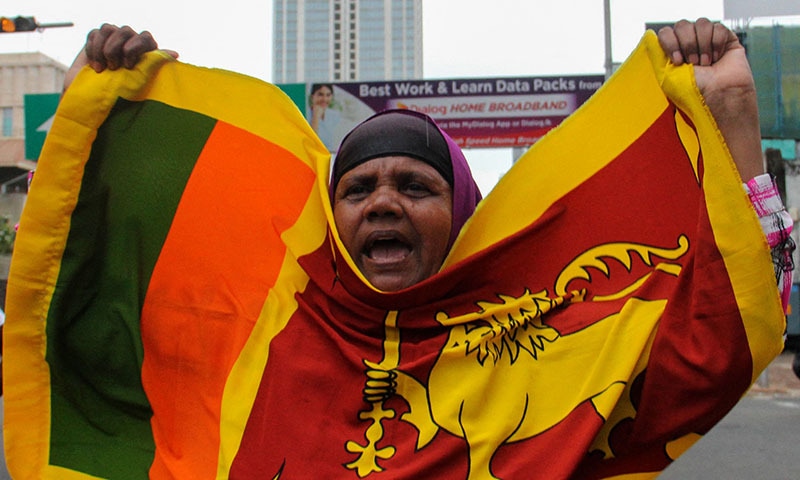 Protestors remained camped outside President Gotabaya Rajapaksa's residence
demanding that he resign meanwhile, as troops continued to patrol the streets
while ordinary Sri Lankans queued up for scarce supplies.

Ranil Wickremesinghe, appointed prime minister for a sixth time on Thursday,
has struggled to form a "unity government" after the main opposition insisted
that Rajapaksa should follow his brother Mahinda who quit as premier last
week.

Opposition leader Sajith Premadasa said his party would not block in
parliament any legitimate "solutions to the economic problems".

Another opposition group, the Sri Lanka Freedom Party (SLFP), said they will
also offer conditional support to Wickremesinghe, overturning their earlier
decision not to.

"We will support any correct decisions taken by the new government to address
tour grave economic crisis," SLFP leader Maithripala Sirisena said in a
letter to the premier.

Official sources said the full cabinet was likely to be sworn in ahead of
Tuesday's parliamentary session, the first since 73-year-old Wickremesinghe's
appointment.

However, there is no finance minister yet, and it is widely expected that the
prime minister will retain the crucial portfolio to lead ongoing negotiations
with the IMF for an urgent bailout.

He held talks Sunday with World Bank and Asian Development Bank
representatives in Colombo focusing on the issues facing the supply of
medicines, food, fuel and fertiliser, his office said in a statement.

"While explaining that discussions have been positive, the Prime Minister
stated that the government is facing the immediate challenge of securing
funds to pay for the fuel requirement for this coming week," the statement
said.

"Due to the dollar shortages in the banks, the government is now exploring
other options of securing the necessary funding."

Shortages of food, fuel and medicines, along with record inflation and
lengthy blackouts, have brought severe hardships to the country's 22 million
people.

Protesters across the Buddhist-majority nation have for weeks demanded the
resignation of President Rajapaksa over Sri Lanka's worst economic crisis
since independence in 1948.

The appointment of Wickremesinghe has so far failed to quell public anger at
the government for bringing Sri Lanka to the brink of economic collapse.

Thousands continue to protest outside the president's sea-front office
demanding his resignation where they have been since April 9.

Long queues stretched outside the few fuel stations that were still open on
Monday, a Buddhist holiday, as motorists waited for rationed petrol.

Heavily armed troops were still patrolling the streets with a state of
emergency still in effect after at least nine people were killed in violence
last week.