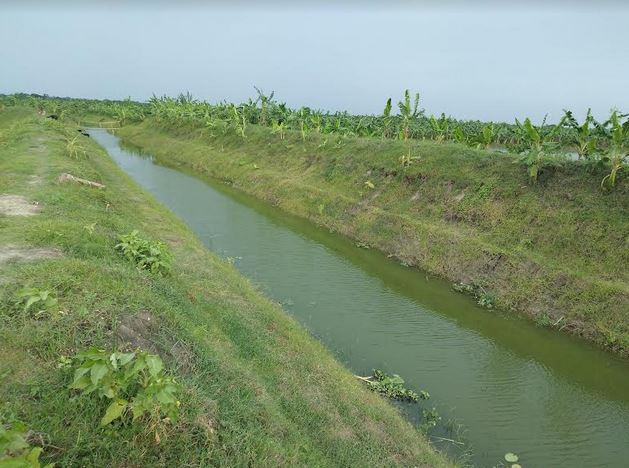 RAJSHAHI, Sept 25, 2022 (BSS)- Initiative has been taken to bring 3,490 more
hectares of lands under surface water irrigation aimed at lessening the
gradually mounting pressure on underground water for irrigation in the dried
Barind tract.

To this end, 38.25-kilometer canals, one pond and two beels will be re-
excavated besides construction of 13 submerged wares.

Apart from this, four pontoons will be installed and two others will be
repaired in rivers side by side with establishing 26 low lift pumps (LLP)
along the banks of the re-excavated canals.

River water will be conserved in the canals through 72.70-kilometer
underground pipelines of 450/500-millimeter diameter for establishing a well-
controlled irrigation system.

Demand-driven irrigation will be ensured to the 3,490 hectares of farming
fields by the canal water to be lifted by 132 solar LLP and 40 direct pumping
schemes through 148-kilometer pipelines of 250-millimeter diameter in double
lifting method.

Barind Multipurpose Development Authority (BMDA) will implement the
infrastructural development works through an uplift project with the main
thrust of enhancing surface water uses for irrigation to 12 percent from 10
percent at present.

The five-year scheme titled "Extension of Irrigation in Barind Area through
Conservation of Water in Canal- 2nd phase" will be implemented in eight
upazilas of Rajshahi, Chapainawabganj and Naogaon districts.

Already approved by ECNEC meeting on August 16 last, the Taka 249.40-crore
project has provision of transplanting sapling of around one lakh fruit and
herbal trees on both sides of the canals to protect ecological balance
through mitigating the adverse impact of climate change.

Superintending Engineer Nazirul Islam told BSS that increasing the capacity
of surface water in dry area has become essential to reduce dependency on the
ground water.

Under the project, pontoons along with pumps will be established in the
selected pumping stations in the rivers of Padma, Mohananda, Punarbhaba,
Atrai, Barnoi and Rani for conservation of water in canals through lifting
from the rivers.

Upon successful implementation by June, 2027, the project will help to
produce about 40,000 tonnes of food through providing irrigation to 3,490
hectares of land from the conserved water sources annually.

Besides, it will be possible to produce 4,000 tonnes of fish worth Tk 90
million and rearing 50 million ducks annually.

It will also create employment opportunities for the day labourers and
marginal farmers in agriculture and living and livelihood conditions of the
farmers' community is likely to be improved through crop production.

As a whole, the scheme will facilitate boosting round the year surface water
uses for irrigation purposes. Engineer Islam said, it would also help improve
environment there a common concern of the area.

Under the first phase of the five-year project, BMDA re-excavated 38.85
kilometers derelict canals besides construction of 16 submerged wares for
creating surface water reservoirs till June, 2020.

Around 1.23 lakh meters underground upvc pipelines were commissioned to
enhance the irrigation efficiency. 96 power-driven low lift pumps were set up
for using the conserved water in the re-excavated canals for irrigation
purposes.

Around 10 solar panels were also installed to operate the pumps for
irrigation.

Jahangir Alam Khan, Coordinator of Integrated Water Resource Management
(IWRM) project, said there are a huge number of ponds and canals in the
Barind area. All the farming lands could be brought under irrigation with the
conserved water round the year if those were re-excavated properly.

Re-excavation of all the existing derelict ponds and canals has become
indispensable to enrich the surface water resources in the drought-prone area
to make its farming system protected.

He also said the retained water could easily be used for supplementary
irrigation of aman, wheat, pulse, oil seeds and vegetables cultivation along
with pisciculture and duck farming.