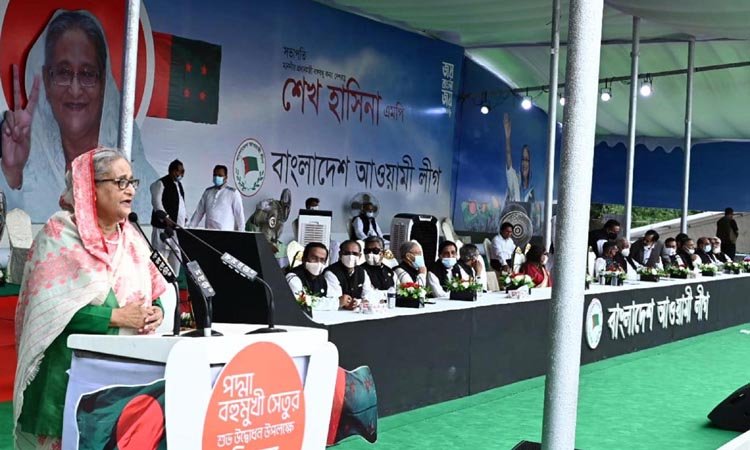 SHIBCHAR, Madaripur, June 25, 2022 (BSS) – Prime Minister Sheikh Hasina today said she considered the people’s power as her supreme strength that had driven her to construct the much-hyped Padma Bridge, promising to work for welfare of the nation alongside giving an improved life to the next generation even by risking her life.

“Many knowledgeable and intelligent personalities of the country had said the construction of Padma Bridge was impossible with own finance. How have we built the Padma Bridge with self-finance? I have done it as you, the people of Bangladesh have supported me and you stand beside me. And I believe that the power of the people is the supreme strength,” she said.

She was addressing a mammoth gathering of around 10 lakh people who waited for hours to welcome and listen to their leader and architect of the Padma Bridge at Kathalbari under Shibchar Upazila of Madaripur district.

The Premier said they have given a befitting reply to the conspirators by constructing the Padma Multipurpose Bridge with self finance.

“We’re giving an apt reply to those, who created impediments, by constructing the Padma Bridge with own funding demonstrating that Bangladesh can do,” she said.

Before joining rally, the Prime Minister formally opened the Padma Bridge, the dream of millions, at Mawa, Munshiganj end by unveiling the inaugural plaque and mural-1. She later unveiled another plaque and mural-2 at Jajira, Shariatpur point.

At the rally, her first public appearance in the south-western part of the country since late 2018, Sheikh Hasina, also president of the Awami League said that she would work for the development of the people of the country and ensure an improved and prosperous life for the next generation.

“My only target is to ensure improved life for the next generation. Today, we have managed food, power and accommodation for the homeless and landless people and made Bangladesh digitised. I will ensure more improved life for our children. Today, this is my promise to you all,” she said.

The Prime Minister said she has got affection and love of father, mother and brothers after losing them, adding, “I am beside you to establish your rights, to change your fate and I am ready to make any sacrifice in doing so. And I will give up my life for you if required.”

Daughter of the Prime Minister and Chairperson of the National Advisory Committee on Autism and Neurodevelopment Disorders Saima Wazed was present on the stage.

Prime Minister reached the venue around 12.50pm when thousands of people, especially leaders and workers of AL of 21 districts, reverberated slogans like ‘Joy Bangla’, ‘Joy Bangabandhu’.

The primer responded to the audience by waving her hand. Colorful papers were spread from helicopters in the venue and the people also cheered by chanting slogans.

The venue and its adjacent areas were decorated with festoons, placards, digital banners. Large screens were installed at different corners of the rally to broadcast the rally proceedings.

A large spectacular stage was built in the style of Padma Bridge at the rally venue and a huge boat was floating on the water right in front of the stage.

Sheikh Hasina said she had laid the foundation stone of the Padma Bridge in 2001, but the Khaleda Zia government had stopped its work, the Awami League government again started its construction after assuming office in 2009.

Referring to local and international conspiracies to stop construction of the country’s longest establishment, the premier said the funding of the World Bank to the construction of the bride was stopped bringing allegation of corruption due to the conspiracy of America as Dr Yunus failed to stay as managing director of the Grameen Bank for legal obligation.

The Prime Minister said when the World Bank withdrew the fund, she had declared to construct the bridge with own finance in parliament, saying, “Bangladesh will not sit idle, rather it will construct the Padma Bridge with self-finance.”

Many people had tried to put obstruction to this end as they thought it was impossible to build the Padma Bridge with their own fund, she said.

“But, I had confidence in the power of the masses. The people of the country had come forward that inspired me to construct the bridge, “she said.

The premier said from now on none would have to sacrifice their lives in crossing the turbulent river during the monsoon at the grace of the almighty Allah, reinterring her conviction that none would be able suppress Bangladesh in the future.

Recalling her launch journey from Dhaka to Gopalganj in 1975 with her father, mother and brothers and in 1981 as the president of the AL, she said it took 22 hours at that time, as those areas were very remote.

Tremendous developments have taken place with the construction of large numbers of roads, culverts and bridges that included Gabkhan, Doarika and Shikarpur bridges, she said.

The Prime Minister said that the fortune of the people of southern region would be brighter as mills and factories alongside food processing industries would be built in the region centring the Padma Bridge and thus employments would be generated, adding, “We will be able to change the fate of at least 21 districts of the region.”

Referring to her government’s all out efforts to mitigate sufferings of the flood-hit people in Sylhet, she said, “Bangladesh and its people have enough strength to face any natural disaster.”

The Prime Minister said that her government had rehabilitated the people affected by land requisition for construction of the Padma Bridge with accommodation and work.

Sheikh Hasina greeted all for coming to the rally that turned it into a human sea braving the scorching sun since early morning, and said in the language of a poet, “I’m empty, I have nothing to give except love and I give you the love.”

Against the backdrop of the coronavirus pandemic and Russia-Ukraine war, the Prime Minister asked all the people to grow food whatever land they have, reiterating, “Don’t leave a single inch of land uncultivated. Grow your food.”