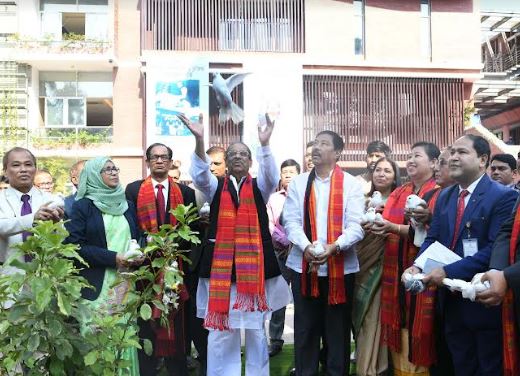 The accord was signed on December 2, 1997 between the government and the Parbatya Chattogram Jana Sanghati Samiti (PCJSS) during the first tenure of Prime Minister Sheikh Hasina, ending bloody conflicts in three hill districts.

The then Jatiya Sangsad (JS) Chief Whip Abul Hasnat Abdullah signed the agreement on behalf of the government while Joritindra Bodhipriyo Larma (Santu Larma) on behalf of PCJSS respectively.

The anniversary programme began with paying tribute to Father of the Nation Bangabandhu Sheikh Mujibur Rahman by placing wreaths at his portrait at Dhanmondi road no 32 at 8.30am.

Marking the anniversary, Sheikh Hasina Parbatya Complex at the Bailey Road in the capital was decorated colorfully. Balloons and 25 pigeons were released on the complex premises.

A discussion was held at the complex auditorium. CHT Accord Implementation and Monitoring Committee Convener Abul Hasnat Abdullah, MP, addressed it as the chief guest with Chittagong Hill Tracts Affairs Minister Bir Bahadur Ushwe Sing in the chair.