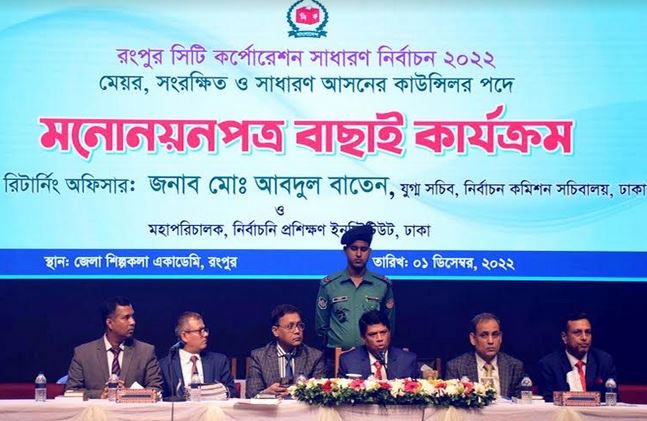 "Nomination papers of all 10 mayoral candidates are valid," Returning Officer for RpCC elections-2022 and Joint Secretary of Election Commission Abdul Baten said in a press briefing after the scrutiny at District Shilpokola Academy auditorium this evening.

He said nomination papers of all 10 mayoral post candidates are valid as those were duly filled with no errors in affidavits, accurate information related to cases, educational qualifications and party certificates.

The last date for withdrawal of nomination papers is December 8 next.

The poll symbols would be allocated on December 9 and RpCC elections will be held from 8 am to 40 on December 27 next.

The Returning Officer said Electronic Voting Machines (EVMs) will be used in all polling centers in the third Rangpur City Corporation elections.

"Every polling station will be covered by CCTV cameras," he said and sought cooperation of all political parties, competing candidates and journalists for holding Rangpur City Corporation elections peacefully.