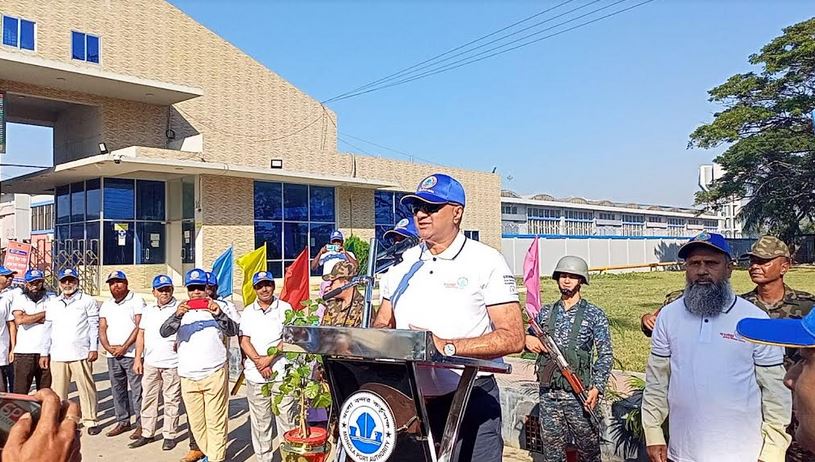 KHULNA, Dec 1, 2022 (BSS)-The 72nd founding anniversary of the Mongla Port, country’s second largest sea port, was celebrated today with a pledge to boost upits capacity, profit and service.
To mark the day, different programmes were held with fanfare and festivity.
The programmes included hoisting of national flag during sunrise, rally, discussion and doa mahfil. The MPA Chairman Rear Admiral Mohammad Musa began the day through cutting a cake and released balloons and pigeons.
Besides, the Mongla Port buildings, main gate, jetty, ships and Mongla Port Authority (MPA) office building and main gate in Khulna were illuminated.
All home and foreign ships anchored at the jetty blew whistle for one minute at 12.01 am.
On the occasion, a rally led by Chairman of the MPA Rear Admiral Mohammad Musa started from the MPA administrative building and ended at the main gate of the jetty after parading different parts of the port area.
Established in 1950, Mongla Port has gone through many struggles and setbacks, said a top official, adding:"Now it's one of the busiest seaports of the country.
Prime Minister Sheikh Hasina took a visionary step to revitalise the port after Awami League (AL) came to power in 2009," the official added.
While speaking at the discussion, MPA Chairman Rear Admiral Mohammad Musa praised Prime Minister Sheikh Hasina for her decision to turn the port into an active one as chief guest.
“Mongla Port will turn into a shipping hub very soon by the visionary leadership of the Prime Minister Sheikh Hasina,” he said.
He said Mongla Port's capacity will be increased by four times within the next three years. About 500 acres of land of the port have been finalized for the construction and extension of its jetty, yard and bonded warehouse, he added.
"The authority has implemented over 60 development programmes from June 2009 to 2022 to enhance its capacity at the cost of Taka 12,000 crore," the MPA Chairman further said, adding that the government is working tirelessly to enhance the connectivity of the Mongla Sea Port.
Till last month, the port saw a record arrival of 288 ships. Describing the facilities of the port, the MPA Chairman said foreign countries are interested in using this port as we are able to present modern facilities to international investors. After inauguration of the Padma Bridge, Mongla Port becomes able to send covered vans and cargoes to the capital city directly within shortest possible time.
Chaired by MPA Director (Admin) Md Shahenur Alam, Comodore Mohammad Abdul Wadud Tarafdar, member (Harbor and Marine), addressed the discussion as special guest while MPA secretary Kalachand Singha delivered the welcome speech.

Later, the chief guest handed over honorary crest among some MPA officials and Port users for their outstanding performances.