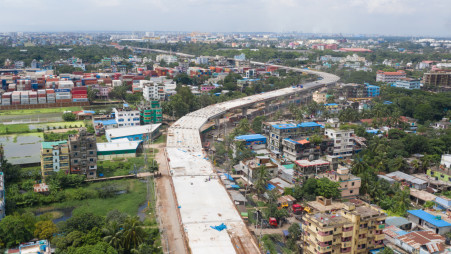 CHATTOGRAM, Dec 1, 2022 (BSS) - A total of 70 percent construction works of the 16-km elevated expressway, the second largest in the country, has already been completed, an official said.

He said the remaining construction works of the four lanes elevated expressway from city's Lalkhan Bazar to Shah Amanat International Airport in Patenga is going on in full swing.

The Tk 4,298 crore mega project aimed to decongest Chattogram city, he said, adding its construction works will be completed by June 2024.

On completion, it will take less than half an hour to go to Patenga from the city center which now takes two hours for traffic jam.

Mahbubul Alam, President of Chattogram Chamber of Commerce and Industries, said the expressway will be connected to the Akhtaruzzaman flyover which will stretch the total length about 22 km.

The expressway will improve connectivity between Chattogram city and the southern region, the chamber president said.

Terming that the elevated expressway will also make communication with CEPZ, KEPZ and Chattogram Shah Amanat Airport easier and faster, industrialist Mustafizur Rahman said it will become a milestone in the communication system of the port city after completing the project.

Among those, the work of two parts from Patenga to Saltgola nears completion while piling is going on from Barrick Building to Dewanhat, he said.

He also said the expressway will have a total 379 pillars from Patenga to Saltgola and from Barik Building to Chowmuhani.

The project director said there will be 15 ramps at seven junctions while the width of the expressway will be 54 feet.

The expressway will have 2500 LED lights, he said.