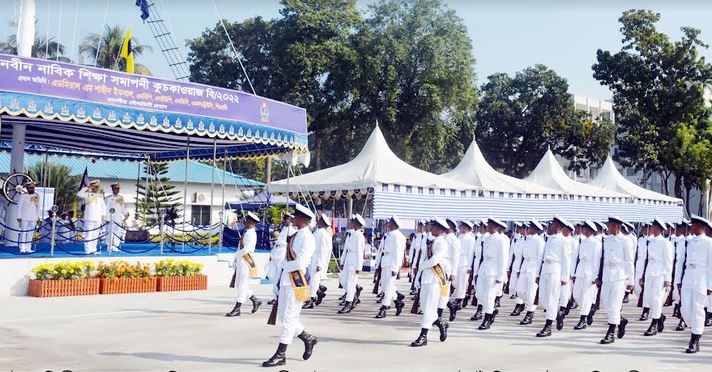 KHULNA, November 30, 2022 (BSS)-Passing out parade marking the induction of B-22 batch of New Entry Sailors of Bangladesh Navy was held at the BNS Titumir Parade Ground at Khalishpur here today.

The chief guest congratulated the new entry sailors of B-2022 batch and urged to show their outstanding performance in the service related to national security and prosperity in future.

Addressing the newly inducted sailors on the occasion, the chief guest said, the Bangladesh Navy has already been turned into a dynamic force under the able leadership of Prime Minister Sheikh Hasina.

He called upon them to build up themselves as worthy sailors by implementing the education in future professional life which they acquire from the sailors school.

With retrospect of the spirit and sacrifice of the freedom fighters, the Navy chief urged the Navy men to go ahead with determination to defend the independence and sovereignty of the country at any cost.

Two new meritime air patrol craft has been included in the navy fleet and at least five patrol craft building works are ongoing at Khulna Shipyard, he said, adding that modern naval station, modern establishment, Bangabandhu Complex and upgrade training center has been completed during the present government tenure.

Besides, Government has planned to add ultra modern misile and guns with ICT based operating system in the naval fleet side by side two utility helicopters, three largest landing craft tanks (LCT) will also be added aiming to enhance operational activities of the navy, he added.

Earlier, the chief guest reviewed the smartly turned out parade and took salute at the march past.

He distributed “Noubahini Pradhan Padak”, “Kadomfhul Padak” and “Titumir Padak” to the three new entry sailors who obtained first, second and third positions for their outstanding performances while “Pritilata Waddedar’ Padak to a woman sailor for her best performance.

The spectacular parade was witnessed, among others, by local high civil and military officials maintaining social distance and health guidelines.