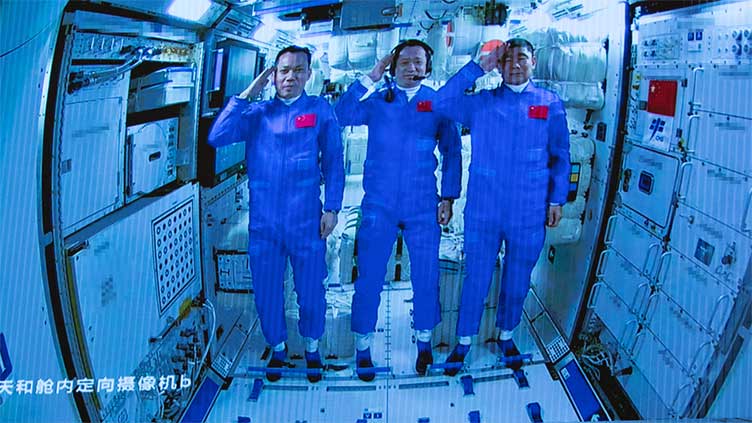 They then joined three other astronauts who had been aboard the Tiangong space station since early June.

The mission's main responsibilities were "achieving the first crew handover in orbit, installing... equipment and facilities inside and outside the space station, and carrying out scientific experiments," said CMSA spokesman Ji Qiming.

"During the stay, the Shenzhou-15 crew will welcome the visiting Tianzhou-6 cargo ship and hand over (operations to) the Shenzhou-16 manned spaceship, and are planning to return to China's Dongfeng landing site in May next year."

The Tiangong space station is the crown jewel of Beijing's ambitious space programme -- which has landed robotic rovers on Mars and the Moon, and made the country the third to put humans in orbit -- as it looks to catch up with the United States and Russia.

"I expect that China will declare construction completion during or at the end of the Shenzhou-15 mission," independent Chinese space analyst Chen Lan said.

China has been excluded from the International Space Station since 2011, when the United States banned NASA from engaging with the country.

Once completed, the Tiangong space station is expected to have a mass of 90 tonnes -- around a quarter of the ISS -- or similar in size to the Soviet-built Mir station that orbited Earth from the 1980s until 2001.

Tiangong, which means "heavenly palace", will operate for around a decade and host a variety of experiments in near-zero gravity.

Next year, Beijing plans to launch the Xuntian space telescope with a field of view 350 times that of NASA's Hubble Space Telescope.