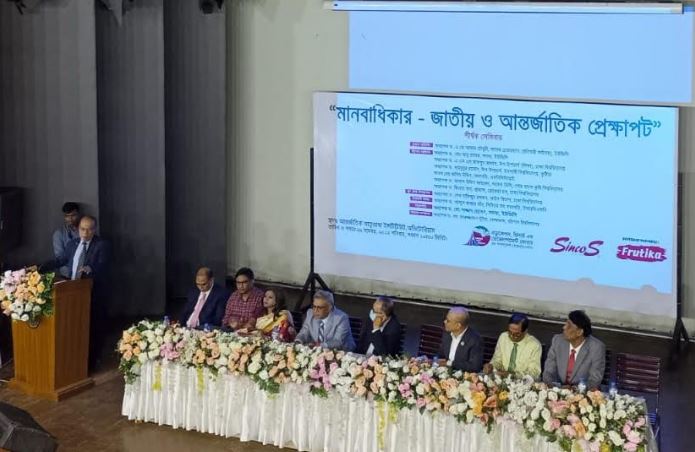 DHAKA, Nov 26, 2022 (BSS) - Speakers at a seminar today said the Awami League government has accelerated country's higher education in a number of ways and improved the state of human rights of the country throughout the years.

"The condition of human rights of the country's people has been improved significantly in the last few years as the AL government paved the way of human rights by executing the war criminals and the killers of Father of the Nation Bangabandhu Sheikh Mujibur Rahman," they added.

The speakers were addressing the seminar on "Human Rights: National and International Context", organised by Education, Research and development Forum of Bangladesh (ERDFB) at International Mother Language Institute this morning.

Prof. Dr. AK Azad, also former Vice-Chancellor of Dhaka University, said, "Human rights cannot be dividable, it shall be come in uniform. Killing is the highest crime and giving impunity to killers cannot be justified."

"Bangabandhu Sheikh Mujibur Rahman and his son Sheikh Russel had the right to live but they could not enjoy it as their rights were violated on the dark night of august 15, 1971," he added.

He said there were only five universities in the country with only 20 thousands students after the Liberation War. But now AL government has created opportunities for 35 lakh students to peruse education from different public and private universities by establishing a number of universities though the qualities of some universities are not up to the mark, he added.

"It is not the duty of government to ensure quality, while government creates opportunity for the public. Now, its people's responsibility to ensure the quality of the universities or institutions using the opportunities", he further said.

DU Pro-VC (Academic) Dr ASM Maksud Kamal said, "America imposing sanctions on us and our RAB with the accusation of human rights violation. But the fact is that USA trained RAB and provided RAB with arms during formation of RAB".

Former VC of Sher-e-Bangla Agriculture University Prof Kamal Uddin Ahmed said those who tried to establish human rights in the history of Bangladesh in different times, were killed and the killing of Bangabandhu is one of those incidents.

He also said that Prime minister Sheikh Hasina is trying to establish Human rights by executing the killers of Bangabandhu establishing rule of law aimed at protecting the human rights in the Country.