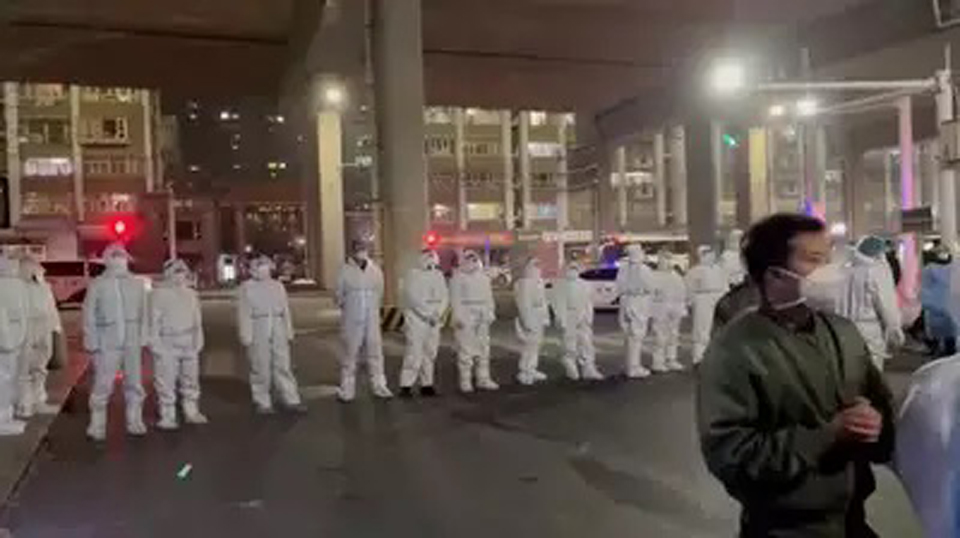 BEIJING, Nov 26, 2022 (BSS/AFP) - A deadly fire in China's northwest Xinjiang region has spurred an outpouring of anger at the country's zero-Covid policy, as Beijing fights growing public fatigue over its hardline approach to containing the coronavirus.

Ten people were killed and nine injured when the blaze ripped through a residential building in the regional capital Urumqi on Thursday night, according to state news agency Xinhua.

Online posts circulating on both Chinese and overseas social media platforms since Friday have claimed that lengthy Covid lockdowns in the city hampered rescue attempts.

Some videos appeared to show crowds of people taking to the streets of Urumqi to protest against the measures.

The action comes against a backdrop of mounting public frustration over the government's zero-tolerance approach to Covid and follows sporadic protests in other cities.

China is the last major economy wedded to a zero-Covid strategy, with authorities wielding snap lockdowns, lengthy quarantines and mass testing to snuff out new outbreaks as they emerge.

Footage partially verified by AFP shows hundreds of people massing outside the Urumqi city government offices during the night, chanting: "Lift lockdowns!"
In another clip, dozens of people are seen marching through a neighbourhood in the east of the city, shouting the same slogan before facing off with a line of hazmat-clad officials and angrily rebuking security personnel.

AFP journalists were able to verify the videos by geolocating local landmarks, but were unable to specify when exactly the protests occurred.

A wave of anger simmered on the Weibo social media platform on Friday amid claims that parked electric vehicles left without power during lengthy lockdowns blocked fire engines from entering a narrow road to the burning building.

"I'm also the one throwing myself off the roof, trapped in an overturned (quarantine) bus, breaking out of isolation at the Foxconn factory," read one comment referencing several recent incidents blamed on zero-Covid strictures.

Chinese authorities censor online content deemed politically sensitive and appeared to have scrubbed many posts and hashtags relating to the fire by Saturday morning.
Urumqi police said in a Friday post on Weibo that they had detained a woman surnamed Su for "spreading online rumours" relating to the number of casualties from the blaze.

An initial investigation showed the blaze to have been caused by a board of electric sockets in the family bedroom of one of the apartments, according to state broadcaster CCTV.

Rescue attempts were complicated by "a lack of parking spaces and a large number of private vehicles parked on both sides" of a narrow road to the building, city fire and rescue chief Li Wensheng told reporters late Friday, CCTV said.

Urumqi mayor Maimaitiming Kade offered a rare formal apology for the blaze at the briefing, according to the broadcaster.

But officials also pushed back against some of the online allegations, denying that residents' doors had been clamped shut with iron wiring.

Covid controls have confined some communities in Urumqi -- a city of four million people -- to their homes for weeks on end.

But in the wake of the protests, officials on Saturday said the city "had basically reduced social transmissions to zero" and would "restore the normal order of life for residents in low-risk areas in a staged and orderly manner".

Pandemic fatigue has been growing in China, with violent protests erupting at a vast Covid-hit factory in the central city of Zhengzhou in recent days due to a dispute over pay and labour conditions.

China recorded 34,909 new domestic infections on Saturday, the vast majority of which were asymptomatic, according to the National Health Commission.