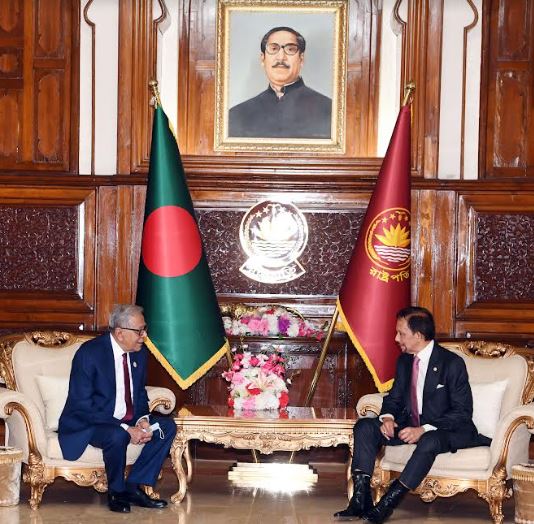 The President came up with the call as visiting Brunei Darussalam Sultan Haji Hassanal Bolkiah Mu'izzaddin Waddaulah paid a courtesy call on him at Bangabhaban here this evening.

Noting that there is an investment-friendly environment in Bangladesh, President Hamid also urged the business community of Brunei to come forward for investment  .

Welcoming the Brunei Sultan , President Hamid said Sultan's first visit to Bangladesh would usher a new chapter of the bilateral ties between the two brotherly countries.

The Head of the State said Bangladesh attaches utmost importance to developing relations with Southeast Asian countries and expected Brunei's full support to get Bangladesh's status of a Sectoral Dialogue Partner of ASEAN.

He also put emphasis  on increasing communication at the public-private levels to increase trade and commerce between the two countries.

Hoping that Brunei’s support would continue in days to come in this regard, the President sought the cooperation of the Sultan and his government for the safe return of the displaced Rohingyas to their ancestral land in Rakhine state of Myanmar.

Brunei sultan lauded the socio-economic development of Bangladesh and assured of providing necessary support to the country in days to come.

The Sulatn also signed a “Visitors’ Book” at the Bangabhaban after the meeting.
Earlier on his arrival at the Presidential palace at 6:55 pm,  he was received by the President with a bouquet.