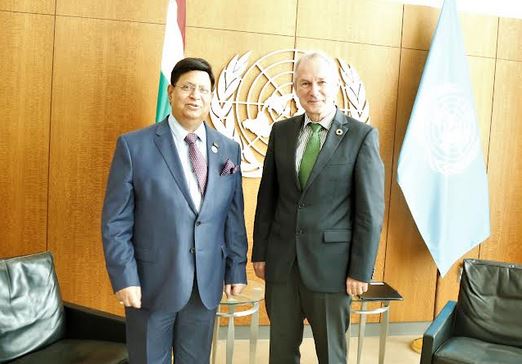 He made the remarks at a bilateral meeting with Foreign Minister Dr AK Abdul Momen, held at the UN Headquarters on Friday, said a press release received here today.

During the meeting, Momen expressed his dissatisfaction on the fact ‘not a single Rohingya has been repatriated to Myanmar yet’.

In response, terming the Rohingya crisis as ‘unacceptable’ Korösi commended Bangladesh’s role in providing shelter and humanitarian assistance to the Rohingyas.

Regarding the climate change issue, the foreign minister stated the importance of more funds for mitigation and adaptation of Climate Change effects.

He further mentioned that the promise of providing USD100 billion funds per year should be materialized at the earliest as PGA expressed his support on this issue.

At the outset of the meeting, the foreign minister presented two proposals to PGA, these are, to organize a high-level event on ‘Review of the implementation of SDGs’ and to take initiative to create a forum of the Finance, Foreign and Development Ministers for developing countries under South-South Cooperation (SSC).

The proposed high-level event will bring an opportunity to review the progress made towards implementing SDGs and the way forward to meet the funding gaps, the foreign minister added.

Regarding the forum of the Finance, Foreign and Development Ministers, Momen said that this forum will create a suitable platform to have substantive dialogue on South-South Cooperation.

Momen also mentioned that under the visionary leadership of Prime Minister Sheikh Hasina, Bangladesh has been able to maintain a satisfactory GDP growth even amidst this pandemic.