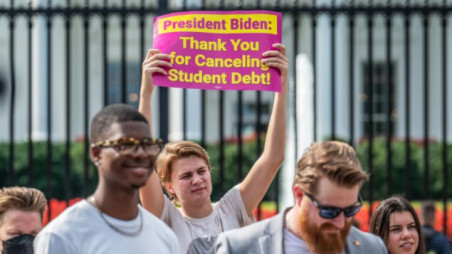 The estimate, requested by conservative lawmakers and issued by an apolitical federal body, is expected to add further fuel to the heated controversy between Democrats and Republicans over the topic.

"CBO estimates that the cost of student loans will increase by about an additional $400 billion in present value" as a result of the debt forgiveness, it said.

But a White House official noted, "CBO called its own estimate 'highly uncertain.' We agree."

Republicans accuse Biden of wasting money on the measure, arguing that public funds could be used more effectively.

Biden announced the plan on August 24, making good on a campaign promise.

Under the relief plan, $10,000 will be cut from all loans owed by people earning a salary of less than $125,000. For former students who went to university with need-based government assistance known as Pell grants, the relief will be $20,000.

US colleges can often cost anywhere between $10,000 and $70,000 a year, leaving graduates with crushing debt as they enter the workforce. According to government estimates, the average debt for US college students when they graduate is $25,000, a sum many spend years or even decades to pay back.

Biden's measure continues to be heavily debated. Estimating the plan's cost is fueling a major technical debate among experts and economists, particularly because it is unclear regarding loan repayments already made by people who benefit from the debt forgiveness.