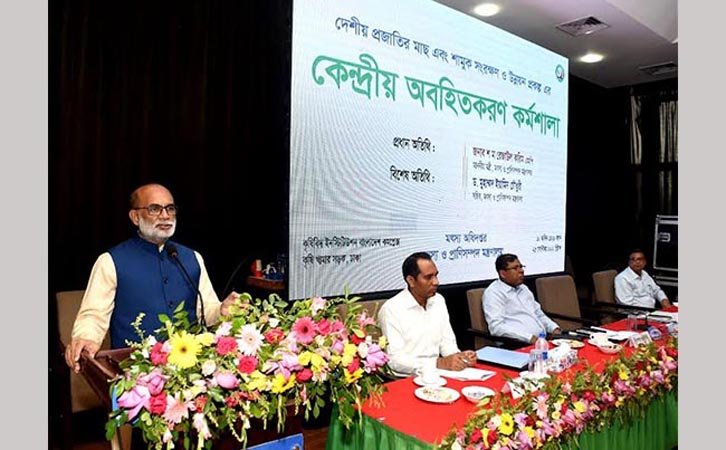 "Indigenous species of fish and snails are very helpful to us. We were once not used to eat marine fish. There was no foreign fish farming here. Our most delicious fish were local ones," he told a workshop.

The central apprising workshop of the native fish species and snail conservation and development project, being implemented by the Department of Fisheries, was held at Krishibid Institution Bangladesh in the capital.

Speaking as the chief guest, Rezaul said many local fish species have eventually disappeared in the country.

Although emphasis was given on cultivation of modern crops, protecting native fish species was not emphasised resulting in rapid decline in local fish production, he said.

Due to the filling up of water reservoirs, ponds, rivers and excessive use of pesticides, the fisheries minister said, native fish species are on verge of extinction and fish sanctuaries have been affected.

But, he said, as a result of the effective initiatives of the current government, Bangladesh Fisheries Research Institute and the Department of Fisheries have brought back some 37 endangered species of native fish so far through their long-term activities.

Chaired by Director General of Fisheries Department KH Mahbubul, the workshop was addressed, among others, by Fisheries and Livestock Secretary Dr Mohammad Yamin Chowdhury and project director SM Ashiqur Rahman.