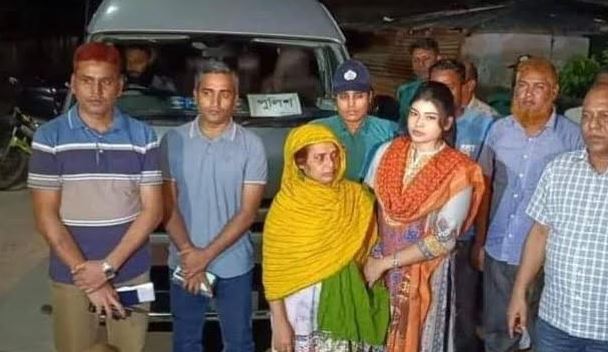 KHULNA, Sept 25, 2022 (BSS) - Police rescued a woman from Sayedpur village under Boalmari upazila in Faridpur district last night after 29 days of her missing.

Acting on a secret information, a team of Khulna Metropolitan Police (KMP) rescued Rahima Begum from the residence of one Quddus, an ex-tenant of Rahima. Police returned to Daulatpur Police Station in the city around 2:00am, Deputy Commissioner (DC) North of KMP Molla Zahangir Hossain Confirmed the news to BSS.

Police arrested Quddus’s wife, her son and her brother’s wife for interrogation, he said.

Molla Zahangir said that Rahima Begum has not given information about her missing until this noon. She will hand over to the Investigation Officer (IO) of Khulna Police Bureau of Investigation (PBI).

“We have doubted from very beginning of her missing as Police haven’t got any sign of abduction though her water bucket (Balti), scarf and slippers were lying on the ground,” he said, adding that Rahima took shelter to Quddus house on September 17.

Quoting Rahima Begum, Molla Zahangir said, she stayed in Chattogram and Moksedpur before taking shelter to Quddus house at Faridpur, a former worker of Sonali Jute Mills Ltd in Khulna.

Rahima Begum, 55, wife of Helal Howlader (Second husband), residence of Maheshwarpara Uttar Banikpara area under Daulatpur Police Station in the city went on missing around 10:00pm on August 27, 2022 while she was going to lift water from a tube-well in front of her house.

On the next day, Aduri Akter Mannan, a daughter of Rahima Begum, filed an abduction case with Daulatpur Police Station. Later the case was shifted to PBI.

Police arrested six people including her second husband Helal and landed in jail.

Meanwhile, Superintendent of Police (SP) of PBI Md Mushfekur Rahman in a press briefing at his office today said, PBI will investigate Rahima’s missing or abduction incident after receiving her into their custody.

“We will produce Rahima Begum before the court seeking remand prayer today,” he said.

Replying a question, he said, “without interrogation, We can’t say anymore just now,”.

She also claimed that the criminals abducted her mother and dumped her body in Mymensing after killing.