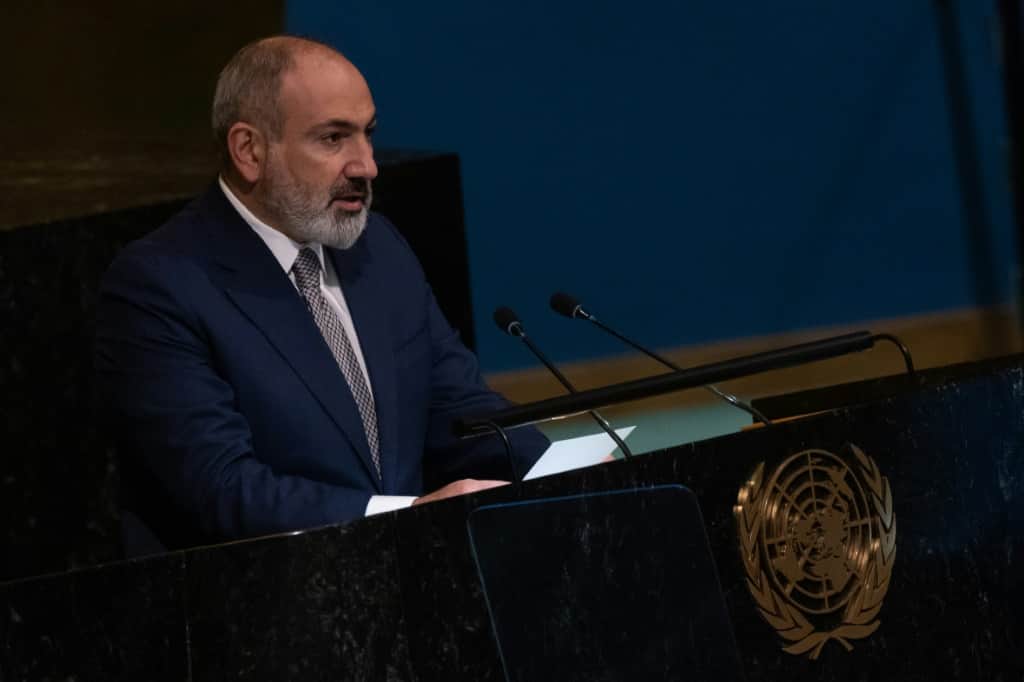 UNITED NATIONS, United States, Sept 23, 2022 (BSS/AFP) - Armenian Prime Minister Nikol Pashinyan used his address before the United Nations Thursday to accuse Azerbaijan of "unspeakable atrocities" during the latest clashes between the two rivals, including mutilating the bodies of dead soldiers.

Fighting flared up last week between the Caucasus countries, leaving nearly 300 dead in the worst violence since a war in 2020.

"There are evidences of cases of torture, mutilation of captured or already dead servicemen, numerous instances of extra-judicial killings and ill treatment of Armenian prisoners of war, as well as humiliating treatment of the bodies," he told the UN General Assembly.

"The dead bodies of Armenian female military personnel were mutilated, and then proudly video recorded with particular cruelty by the Azerbaijani servicemen."

As Pashinyan spoke, Azerbaijan's Foreign Minister Jeyhun Bayramov, who is set to address the global body this weekend, watched impassively.

Pashinyan went on: "No doubt, committing such unspeakable atrocities is a direct result of a decades-long policy of implanting anti-Armenian hatred and animosity in the Azerbaijani society by the political leadership."

He also accused Azerbaijan of shelling civilian facilities and infrastructure deep inside his country's territory, displacing more than 7,600 people, as well as leaving three civilians dead and two missing.

"This was not a border clash. It was a direct, undeniable attack against the sovereignty and the territorial integrity of Armenia," he said.

The speech comes just days after US Secretary of State Antony Blinken urged peace between the two sides in a meeting where he hosted both countries' top diplomats.

"Strong, sustainable diplomatic engagement is the best path for everyone," Blinken said.

US House Speaker Nancy Pelosi, during a visit Sunday to the Armenian capital Yerevan, blamed Baku for "illegal" attacks on Armenia, condemning an "assault on the sovereignty" of the country.

Washington's ties are deepening with Yerevan whose traditional ally Moscow is distracted with its invasion of Ukraine.

Russia has close ties with both former Soviet states. It is obligated to intervene if Armenia is invaded under a security pact, but did not rush to help despite an appeal from Yerevan.

Armenia and Azerbaijan have fought two wars -- in the 1990s and in 2020 -- over the contested region of Nagorno-Karabakh, an Armenian-populated enclave of Azerbaijan.

A six-week war in 2020 claimed the lives of more than 6,500 troops from both sides and ended with a Russian-brokered ceasefire.

Under the deal, Armenia ceded swathes of territory it had controlled for decades, and Moscow deployed about 2,000 Russian peacekeepers to oversee the fragile truce.