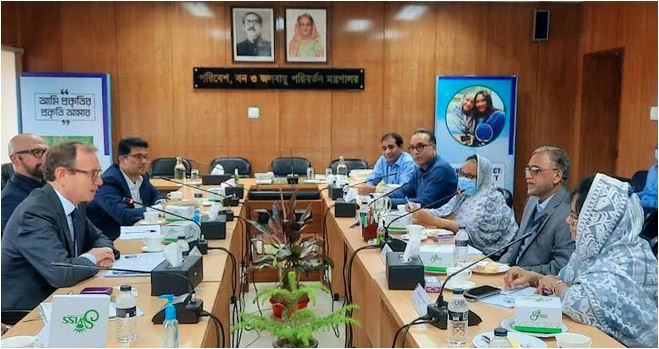 “Certainly, we shall mobilise domestic resources. However, without International and bilateral support, it would be very difficult for us to implement and attain climate resilience. So, we are promoting and encouraging cooperation and support from developed country like the United Kingdom,” he said.

The environment minister made the remarks when a delegation, led by Robert Chatterton Dickson, British High Commissioner to Bangladesh, called on him at the conference room of the ministry.

Shahab Uddin said the government of Bangladesh is doing its best with its limited resources to protect environment and biodiversity and cope with climate change impacts.

“In the updated NDC, Bangladesh has increased quantified emission reduction targets from 15 percent to 21.85 percent below the business-as-usual level by 2030.  We are looking forward to the committed US$ 100 billion by the developed countries to tackle climate change,” he said.

Referring to the UK-Bangladesh relations, the envoy said the ongoing UK’s cooperation to Bangladesh will continue.