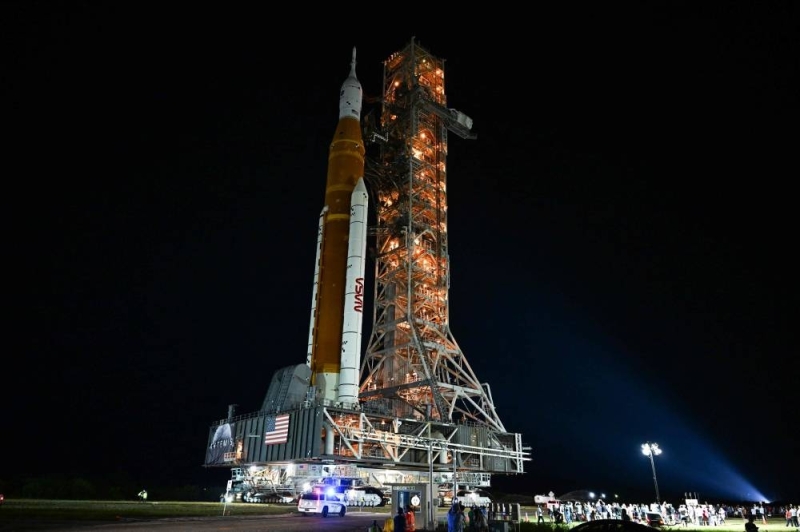 at its launchpad Wednesday in Cape Canaveral ahead of a planned flight to the
Moon in less than two weeks.

It will be the maiden voyage of the Artemis program -- America's quest to
return humans to the Moon for the first time since the last Apollo mission in
1972.

The Artemis 1 mission, an uncrewed test flight, will feature the first
blastoff of the Space Launch System rocket, which will be the most powerful in
the world.

It will propel the Orion crew capsule into orbit around the Moon, and the
spacecraft will remain in space for 42 days before returning to Earth.
Starting in 2024, astronauts will travel aboard Orion for the same trip,
and the following year, at the earliest, Americans will once again set foot on
the Moon.

The SLS rocket, in development for more than a decade, is 98 meters (322
feet) tall.

On Wednesday it stood at historic launch complex 39B, after a 10-hour
overnight crawl from the assembly building.

"To all of us that gaze up at the Moon, dreaming of the day humankind
returns to the lunar surface, folks, we're here. We are going back," NASA
administrator Bill Nelson said earlier this month.

The Orion capsule will fly to the Moon and 64,000 kilometers (40,000 miles)
beyond it -- further than any previous crewed spacecraft.

On the way back through Earth's atmosphere, traveling at 40,000 km per hour
(25,000 mph), Orion's thermal shield will have to withstand a temperature that
is half that of the surface of the sun.

After the 42-day trip, the capsule is supposed to splash down in the
Pacific and be picked up by a US Navy vessel.

In 2024, an Artemis 2 mission is scheduled to take astronauts up to orbit
the Moon but without landing on it. That honor is reserved for Artemis 3, a
mission scheduled for 2025 at the earliest.

The last time people walked on the Moon was with the Apollo 17 mission in
1972.

While the Apollo program featured only white male astronauts, NASA says the
Artemis missions will land the first woman and first person of color on the
Moon.

The hope is to use the Moon as a staging ground to develop technologies for
sending humans to Mars.