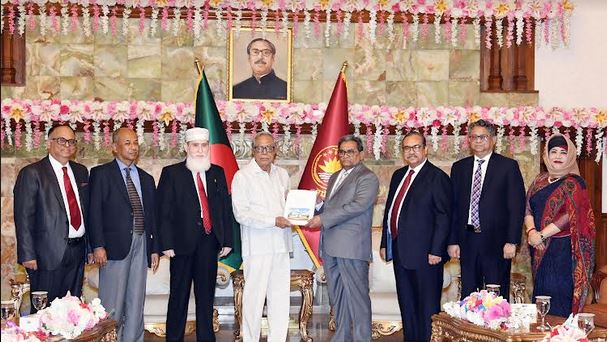 DHAKA, Aug 17, 2022 (BSS) - President M Abdul Hamid today asked the authorities concerned of the Supreme Court (SC) of Bangladesh to take appropriate steps to ensure justice through reducing pending cases aimed at lessening sufferings to the litigants by using the information technology (IT).

The Head of the State came up with the call as a delegation of judges led by the Chief Justice of Bangladesh Hasan Foez Siddique submitted Bangladesh Supreme Court's Annual Report 2021 at Bangabhaban here this evening.

President Hamid hoped that country's Judiciary would continue its relentless efforts to bring the benefits of freedom at the people's doorsteps by ensuring justice.

During the meeting, the Chief Justice briefed the President about the various aspects of the annual report and the overall activities of the Judiciary.

In the meeting, Justice Siddique said, this year the SC will celebrate the 50th anniversary of the Constitution of the People's Republic of Bangladesh and the Bangladesh Supreme Court in a befitting manner.

Abdul Hamid expressed his satisfaction over the overall activities of the Supreme Court, the apex court of the country.

Secretaries concerned of the President's office were present there.