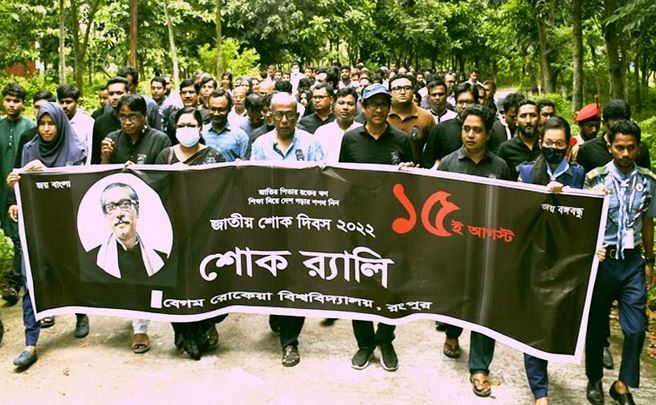 Vice-chancellor (VC) Professor Dr. Hasibur Rashid and Pro-VC Prof Dr Sarifa
Salowa Dina laid wreaths at the mural of Father of the Nation Bangabandhu
Sheikh Mujibur Rahman on the campus in observance of the day.

The VC also paid due homage to all the martyrs including Bangabandhu who were
brutally killed on August 15, 1975 and prayed for eternal peace of their
departed souls.

Earlier, the national flag was hoisted at half-mast, the black flag was
hoisted and black badges were worn and a one-minute silence was observed in
honour of all the martyrs of August 15, 1975.

Led by the VC, a mourning procession with participation of the teachers,
students, officers and employees of BRUR was brought out on the campus and
its adjoining areas.

Recitation from the Holy Quran, milad and doa mehfils were organised at the
university's central mosque seeking divine blessings for eternal peace of the
departed souls of all the martyrs of August 15, 1975, including Bangabandhu.

State Minister for Shipping Khalid Mahmud Chowdhury participated virtually in
a discussion on Bangabandhu as the chief guest with the VC of the university
in the chair.

The Pro VC addressed the discussion as a special guest moderated by Associate
Prof of Department of Bengali Dr. Shafiqur Rahman.