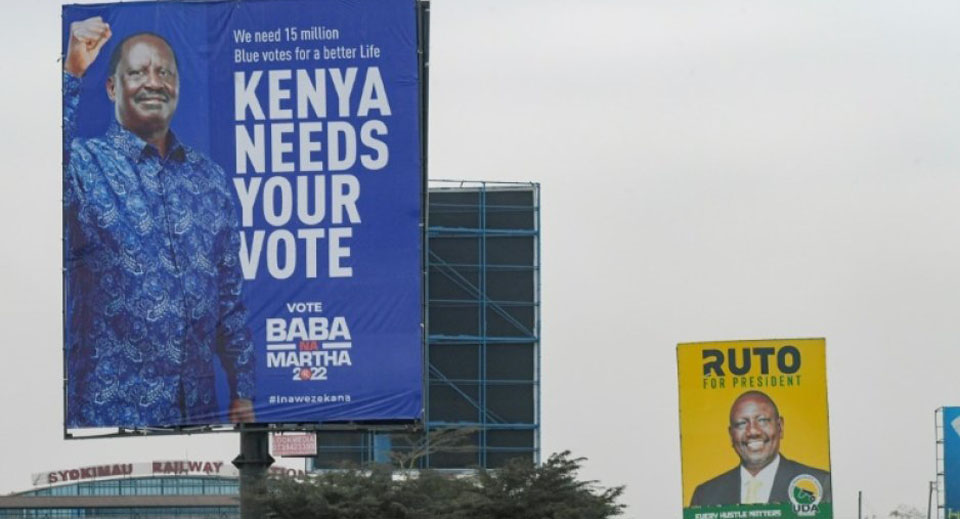 Odinga has 52.54 percent of the vote against 46.76 percent for Deputy President William Ruto, according to early afternoon figures from the Independent Electoral and Boundaries Commission based on results from about 30 percent of polling stations.

The election is being closely watched as a test of stability in Kenya, which is one of the continent's most dynamic democracies but has seen past votes marred by rigging and deadly violence.

As the wait for results dragged on, the election commission on Friday acknowledged that the tallying process was moving too slowly and appealed for the nation to be patient.

Odinga, 77, is making his fifth stab at the top job -- this time with the support of his longtime foe, the outgoing President Uhuru Kenyatta, who has already served two terms and cannot run again.

Ruto, 55, has been deputy president for almost a decade but was left out in the cold after a pact between Odinga and Kenyatta in 2018 that dramatically shifted political allegiances.

Although the campaign was mired in acrimony and widespread disinformation, polling day passed off largely peacefully with only a few incidents reported of electronic ID machines malfunctioning and delays in opening some polling stations.

Turnout was about 65 percent, much lower than the 78 percent recorded in 2017, a reflection, some observers say, of the disenchantment with the political elite, particularly among young people.

The state of the economy was a key issue during the campaign, with Kenyans struggling to make ends meet as global prices for essential goods such as food and fuel soar.

The winner of the presidential race needs to secure 50 percent plus one vote and at least a quarter of the votes in 24 of Kenya's 47 counties.
If not, the country will be forced to hold a runoff within 30 days of the original vote.

Both frontrunners have pledged to ensure calm after the outcome is known, with Kenyans still haunted by the deadly violence that followed the 2017 and 2007 polls.

But observers say that with the race so close, an appeal to the Supreme Court by the losing candidate is almost certain, meaning it could be many weeks before a new president takes office.

Kenyans had been left confused when television stations which have been providing rolling coverage of the election, suddenly stopped broadcasting provisional results late Thursday after various channels showed different outcomes.

Media Council of Kenya CEO David Omwoyo insisted there was nothing underhand about the stoppage or the discrepancies in numbers.

"No one has asked anyone to stop the tallying and projection of the results," he said Friday. "We are liaising with media houses to align the reporting."

In a bid to be transparent, the IEBC -- which faced stinging criticism over its management of the annulled August 2017 poll -- has been uploading documents to its website showing results from each polling station.

But Omwoyo said various media groups had different capacities and had been "tallying based on their own parameters".

Social media has been littered with disinformation about the results, with rights campaigners and civil society groups accusing both candidates' camps of sharing misleading posts.

"We have observed that we are not moving as fast as we should. This exercise needs to be concluded as soon as possible," Chebukati said.

IEBC chief executive Marjan Hussein Marjan also Friday denied that the commission's systems and results portal had been hacked, insisting "the mechanisms we have put in place are foolproof".

Meanwhile, the education ministry announced that schools would remain shut until Thursday, two days after the deadline for results to be announced.

Evelyn Oduor, a 35-year-old tailor in Odinga's lakeside stronghold of Kisumu, said she was simply eager for the election to be over and for a return to normal life.

"Right now we're very tired. We're not going to work. Our students are in the house," she said.